'Goodbye' Can Be Fun With "DJ Amitabh Bachchan In The House." See His Co-Star's Post

"What a beautiful night with DJ Amitabh Bachchan in the house," wrote Goodbye co-star Pavail Gulati 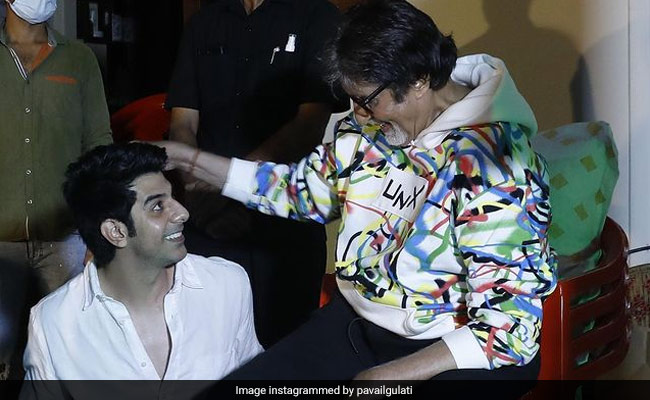 The schedule wrap of Vikas Bahl's upcoming directorial project Goodbye, starring Amitabh Bachchan, Rashmika Mandanna and Pavail Gulati, was celebrated by the members of the cast. Thappad actor Pavail Gulati shared pictures from the film's wrap and after-party on his Instagram profile on Tuesday. In the pictures, he can be seen dancing with Rashmika Mandanna. BTW, did we mention that Amitabh Bachchan channeled his inner DJ at the film's wrap party. Pavail, who co-starred with Big B in Yudh, wrote in his caption: “Schedule wrap! What a beautiful night with DJ Amitabh Bachchan in the house.” Need we say more?

Goodbye is being directed by Vikas Bahl and it is being backed by Ekta Kapoor. Goodbye will be Rashmika's second Bollywood film after Mission Majnu, opposite Sidharth Malhotra. The actress celebrated her 25th birthday on the sets of the film and posted pictures with her co-star Amitabh Bachchan. "What a satisfying day looks like... PS_ The mask was taken off only for clicks! Wear a mask at all times, guys." She added the hashtag #Goodbye (the film's name).

Beside Goodbye, Amitabh Bachchan's upcoming projects include Ayan Mukerji's Brahmastra, co-starring Alia Bhatt and Ranbir Kapoor, and Chehre, alongside Emraan Hashmi. He will also be seen in the sports drama Jhun. The actor recently signed the Hindi remake of the Hollywood film The Intern, in which he will co-star with Deepika Padukone. Earlier, late actor Rishi Kapoor was meant to star in it. The original film features Robert De Niro and Anne Hathaway.

Rashmika Mandanna started her career as a model for a commercial, from where the makers of Kirik Party selected her for the lead role opposite Rakshit Shetty. After the success of her debut film, Rashmika signed Harsha's Anjani Putra, opposite Puneeth Rajkumar and Chamak, opposite Ganesh. She has also starred in films like Geetha Govindam and Dear Comrade, both starring Vijay Deverakonda. She also featured in Sarileru Neekevvaru, with Mahesh Babu.