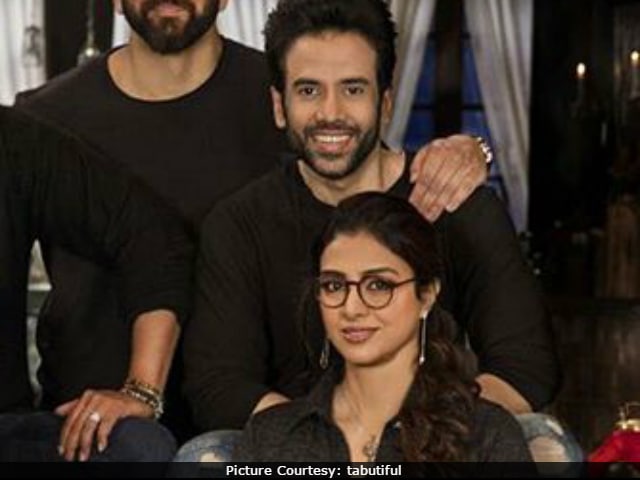 New Delhi: Veteran actress Tabu, who is currently shooting the fourth installment of Golmaal, has said that it is a treat for her to work with actors Johnny Lever and Tusshar Kapoor. The Haider actress posted a picture of herself with Mr Lever and Tusshar from the sets of Golmaal 4 along with an honest caption. She wrote: "Treat to work with you both." This is not the first time that Tabu will be sharing screen space with Mr Lever as she has already worked with him in movies like Haqeeqat, Jeet and Shikari. On the contrary, this is the first time Tusshar Kapoor will be seen with Tabu. The cast of Golmaal Again is currently shooting in Hyderabad. The movie, which also stars Ajay Devgn and Parineeti Chopra in lead roles, is set to release sometime this year.

Promoted
Listen to the latest songs, only on JioSaavn.com
The star cast of Golmaal Again is surely having a fun time shooting together as recently Parineeti Chopra shared a video of herself and co-star Ajay Devgn. The video shows an embarrassed Ajay Devgn as team Golmaal watches one of his old songs, Halle Halle from 2001 movie Yeh Raaste Hain Pyaar Ke. Pareeniti is also awaiting the release of her upcoming movie Meri Pyaari Bindu, co-starring Ayushmann Khurrana. The actress has made her singing debut in the movie with the song Maana Ke Hum Yaar Nahin and has received rave reviews for the same.

Golmaal 4also features Arshad Warsi, Kunal Khemu and Shreyas Talpade. The team recently wrapped the first schedule of the movie, which was being filmed in Mumbai. This time, actress Kareena Kapoor, who played the leading lady in two of the instalments, is not returning and has been replaced by Parineeti and Tabu.