GodFather: Chiranjeevi On Why He Picked Salman Khan Over Aamir Khan In The Film

"The character didn't need someone with heart and brain, but needed someone for their physicality," said Chiranjeevi 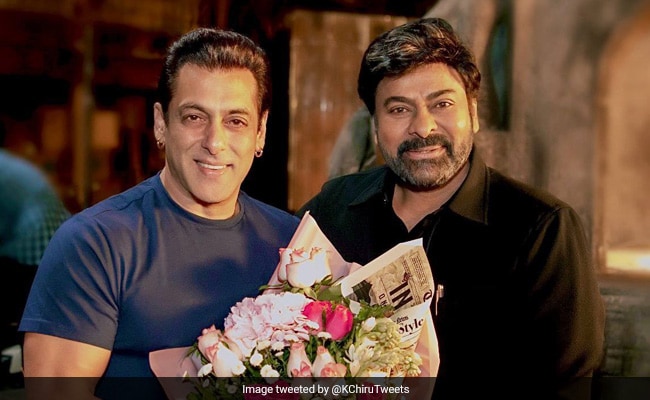 Chiranjeevi, who is presenting the Telugu version of Aamir Khan's Laal Singh Chaddha, during the film's promotions revealed why he cast Salman Khan and not Aamir Khan in his film GodFather. A video from the event is doing the rounds on social media, in which Aamir Khan says, "You see I was telling Chiranjeevi garu that please allow me to do something for you. Then he said, 'I will call you'. And two days later, he told me that, 'I was shooting with Salman (Khan) and he was telling me something about the movie'. Then I asked him, You didn't call me. You called Salman?" Replying to which, the veteran actor said, "The character didn't need someone with heart and brain, but needed someone for their physicality, and that's why we went with Salman."

Here's the video, shared by a fanclub.

Earlier this month, a special screening of Laal Singh Chaddha was held in Hyderabad. Chiranjeevi shared a clipping from the screening, which was attended by veteran actor Nagarjuna, Baahubali and RRR director SS Rajamouli and Pushpa director Sukumar. Posting the video, Chiranjeevi wrote: "Fascinating how a chance meeting and a little chat with my dear friend Aamir Khan at Kyoto airport - Japan, few years ago led to me becoming a part of his dream project Laal Singh Chaddha. Thank You Aamir Khan for the exclusive preview at my home. Heartened by your warm warm gesture. Most of all, what a gem of a film you have made. Such a wonderful emotional journey."

Chiranjeevi welcomed Salman Khan onboard by sharing this post for the actor and he wrote: "Welcome aboard GodFather, Bhai Salman Khan. Your entry has energised everyone and the excitement has gone to the next level. Sharing the screen with you is an absolute joy. Your presence will no doubt give that magical "kick" to the audience."

Welcome aboard #Godfather ,
Bhai @BeingSalmanKhan ! Your entry has energized everyone & the excitement has gone to next level. Sharing screen with you is an absolute joy. Your presence will no doubt give that magical #KICK to the audience.@jayam_mohanraja@AlwaysRamCharanpic.twitter.com/kMT59x1ZZq

GodFather is the remake of Prithviraj Sukumaran's Malayalam film Lucifer, which featured Mohanlal in the lead role. GodFather, directed by Mohan Raja, also features Salman Khan, Nayanthara and Satyadev. The film is produced by Konidela Production Company along with Super Good Films.