Chiranjeevi's Godfather is the remake of the Malayalam film Lucifer. 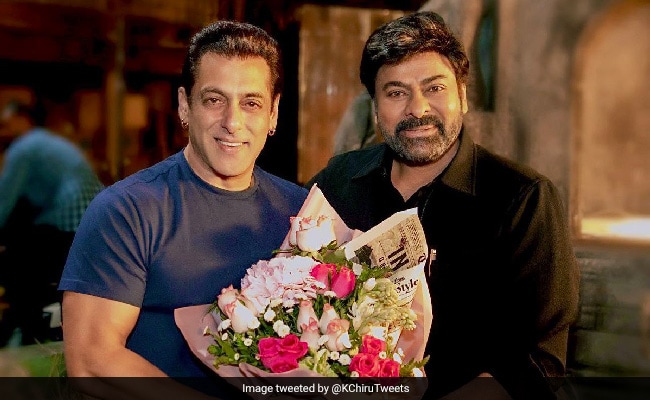 All Salman Khan fans must pay attention here. He is all set to take a leap into the Telugu film industry. And, the news was confirmed by Telugu superstar Chiranjeevi himself. Salman has been roped in for Chiranjeevi's upcoming film Godfather. The actor has posted a photo with Salman Khan where the two are holding a bouquet of flowers. The tweet read, "Welcome aboard Godfather, Bhai Salman Khan. Your entry has energised everyone and the excitement has gone to the next level.  Sharing the screen with you is an absolute joy. Your presence will no doubt give that magical “kick” to the audience." We do notice Chiranjeevi's reference to Salman Khan's hit movie Kick. Here's the post:

Welcome aboard #Godfather ,
Bhai @BeingSalmanKhan ! Your entry has energized everyone & the excitement has gone to next level. Sharing screen with you is an absolute joy. Your presence will no doubt give that magical #KICK to the audience.@jayam_mohanraja@AlwaysRamCharanpic.twitter.com/kMT59x1ZZq

Chiranjeevi's Godfather is the remake of actor Prithviraj Sukumaran's Malayalam directorial Lucifer. The Malayalam film featured Mohanlal in the lead. Godfather, directed by Mohan Raja, will also feature Nayanthara and Satyadev Kancharana. The film is produced by Konidela Production Company along with Super Good Films.

Recently, Salman Khan has released a teaser for the third instalment of the Tiger franchise. Tiger 3, which also feature Katrina Kaif, is scheduled to release on April 21 in 2023. The actor announced the news on social media and wrote, "Hum sab apna apna khayal rakhen [Let's take care of ourselves]...Tiger 3 on 2023 Eid…Let's all be there...Releasing in Hindi, Tamil and Telugu. Celebrate Tiger 3 with YRF only at a big screen near you on April 21, 2023."

Salman Khan not only promoted his film but also gave a shoutout to Ajay Devgn's Runway 34with a special post. Releasing a teaser of the film, Salman Khan wrote, "I don't have any film ready toh maine apne bhai Ajay Devgn se request ki hai if he can come on Eid, Eidi dene ke liye. Chalo iss Eid hum sab celebrate karenge aur dekhenge Runway 34 [I couldn't release any of my films on Eid this year, so I have requested my brother Ajay Devgn to come on Eid with the Eidi gift. We all will celebrate Eid and watch Runway 34]."

Salman Khan was last seen on the big screen in Antim: The Final Truth.

Ayushmann Khurrana's Birthday Wish For Wife Tahira Kashyap Is Everything