"Ghost of Marilyn Monroe Was With Me", Claims 'Blonde' Actor Ana de Armas

Marilyn Monroe was an American actress, singer, and model. She starred in a number of commercially successful films during the 1950s. 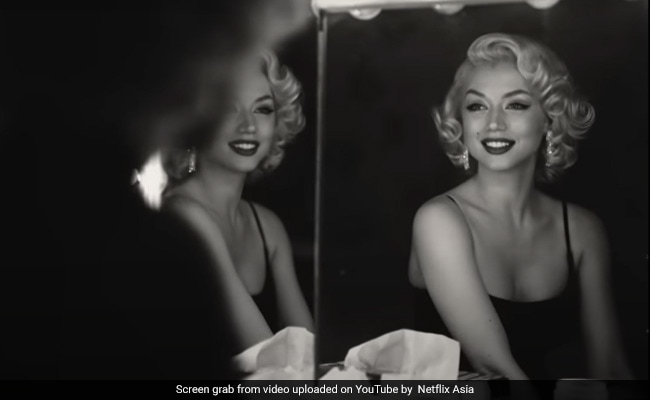 'Blonde' will debut on Netflix on September 28.

The actor who is playing Marilyn Monroe in the Netflix film "Blonde" has claimed that the ghost of the Hollywood icon interfered with the filming. Ana de Armas made the claim while speaking to the media at the Venice International Film Festival. According to Netflix, this fictional portrait of Marilyn Monroe boldly reimagines the tumultuous private life of the Hollywood legend - and the price she paid for fame.

Ms De Armas, who was nominated for the Golden Globe award for Knives Out, said she felt close to the Hollywood legend during the shoot. The 34-year-old further claimed if Monroe's ghost wasn't thrilled with the way they were portraying her on video, it would let them know, as per a report in People Magazine.

"She would also throw things off the wall sometimes and get mad if she didn't like something," she told reporters. "Maybe this sounds very mystical, but it is true. We all felt it."

Ms De Armas also acknowledged that before taking up the role, she understood very less about the legendary actress but became completely engrossed in the role before the filming began.

The film's director, Andrew Dominik, also addressed the media. He spent more than 10 years attempting to adapt Joyce Carol Oatesby's book of the same name for the big screen. "It definitely took on elements of being like a seance," he said.

Mr Dominik added that after watching De Armas' 2015 movie "Knock Knock," he was certain the actress could handle the challenging part despite having a heavy Spanish accent.

On September 8, the movie had its world premiere at the 79th Venice International Film Festival. It will be released in theatres across the US on September 16. The movie will debut on Netflix on September 28.

Marilyn Monroe was an American actress, singer, and model. She starred in a number of commercially successful films during the 1950s, and is considered a pop culture icon.

By the time of her death in 1962, her films had made $200 million, making her one of the top-billed actresses of her time.

Marilyn Monroe was named sixth on the American Film Institute's list of the best female film legends from the Hollywood Golden Age in 1999.