The video was an instant hit on the social media platform. 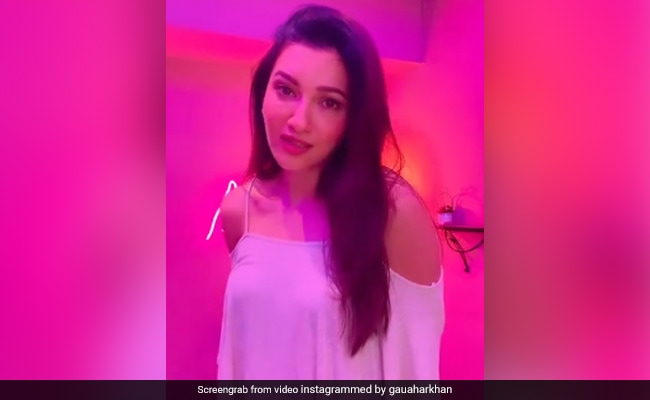 Gauahar Khan in a still from the video. (Image courtesy: gauaharkhan/)

Actress Gauahar Khan is a charmer and there is no denying this. The talented dancer, model and actress is known for her charismatic personality. And giving fans just what they want, Gauahar shared a fun video on her Instagram feed on Tuesday. In it, the actress is seen embracing the Bollywood heroine within her as she grooves and lip-syncs to the popular song Tu hi tu, from the hit Salman Khan film Kick.  Along with the video, Gauahar wrote, "Ye gaana suna, accha laga, toh nakhre kar liye (Heard this song, liked it, so decided to act along)." She also added the hashtag "Filmy hoon main (I am filmy)," in the caption. The actress  picked a simple white top and a pair of denim pants for the act.

The video was an instant hit on the social media platform. Followers of the actress proved just how much they loved the Reels by flooding the comment section with a slew of heart and fire emojis.

The actress often shares interesting Reels with her fans. In some of them, we get to see her husband, choreographer-content creator Zaid Darbar. A while back, the actress took the "This or That" challenge with Zaid. In it, we saw that while Gauahar prefers the sunrise, Zaid is a nightbird. Similarly, while the model swears by her salads, Zaid cannot say no to pizza and pasta. But they also share some similarities - both of them love watching movies and prefer marriage to singledom. Sharing the video, she wrote, "Bade aaye single," which loosely translates to "single, they say!"

Along with all the fun stuff, Gauahar also ensures that she shares her vulnerable side with the online family. The actress, who lost her father, Zafar Ahmed Khan, earlier this year, shared a moving note on the occasion of Father's Day. Sharing an image from her wedding last year, she wrote, "I miss you. My hero. Happy Father's Day 2021. You are with me. I know that. Zafar Ahmed Khan is the coolest, most loving, most gentle father to us." She added some hashtags to the post, “My wedding memories” and “Gazab ka hai din”.

Gauahar Khan is known for her work in films such as Ishaqzaade, Rocket Singh: Salesman of the Year, Badrinath Ki Dulhania and Begum Jaan. She was last seen in the web series Tandav. She married Zaid in December 2020. Zaid is the son of music director-singer Ismail Darbar.