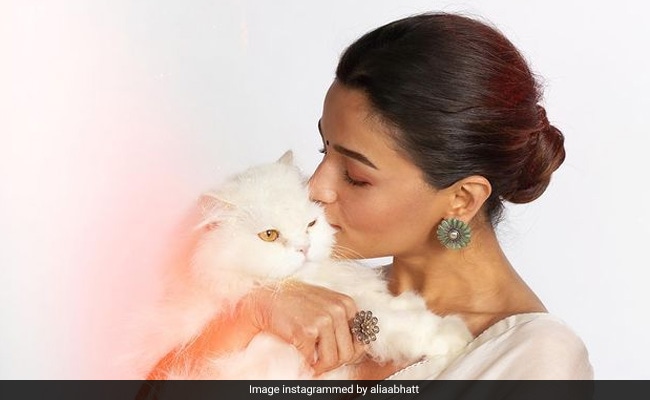 It's no news that Alia Bhatt is currently neck-deep into the promotions of her upcoming film Gangubai Kathiawadi. But she is not alone in these hectic campaigns. Alia's pet cat has simply tagged along for the film promotions. A recent set of snapshots from Alia's Instagram shows her hugging and kissing the furball during a promo photoshoot. Alia looks ravishing in a white saree. But what has stolen our heart is her pet, Edward. The white Persian cat is receiving a good amount of pampering from Alia as she carries it in her arms. Alia wrote the caption in her unique style, "Edward bhai aur Gangubai." Take a look at this adorable duo:

Alia Bhatt has been packed up in busy schedules for multiple film projects these days. But what does Alia  do once she is in her cosy corner? Well, she and her pet Edward rather choose to laze out on the bed. In one Instagram post, we see her lying down on the bed with Edward and both of them seem to be in a lazy mood. For the caption, Alia wrote, "IRL (in real life)" and added a monkey emoji.

Alia Bhatt's fans appreciate Edward's role in her life. In another photo, Alia is pampering Edward with a lot of care. The two look into each other's eyes in the cute pic. Alia captioned the image, "My muse."

The cat stays by Alia Bhatt's side, no matter what. And, she makes sure that the furball's love for her gets appreciated. For Alia, Edward is her "calm in every storm." She attached a photo where Edward is sleeping and Alia is peeping from the back.

Alia Bhatt'sGangubai Kathiawadi, directed by Sanjay Leela Bhansali, will release on February 25. The actress recently posted the trailer of the film. Take a look: