Bollywood Celebs' Ganesh Chaturthi: Priyanka Chopra, the Bachchans all queued up for the darshan of Lalbaugcha Raja 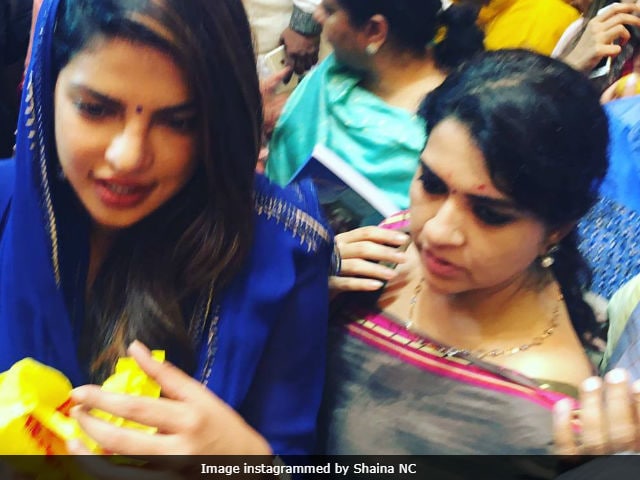 New Delhi: Lalbaugcha Raja is one of Mumbai's most famous Ganpati sarvajanik pandals organised during the Ganesh Chaturthi festivities every year. Lord Ganesha makes a grandiose appearance as Navsacha Ganpati (who fulfils everyone's wishes) in Lalbaug, which is visited by celebrities and non-celebs alike during the 10-day festival. This year actors such as Priyanka Chopra, Amitabh Bachchan, Ajay Devgn (awaiting the release of Baadshaho) and Sanjay Dutt (actor of upcoming film Bhoomi) have bowed before Lalbaugcha Raja. The recent Mumbai rains have put a temporary stopper in the ongoing Ganesh Chaturthi celebrations; therefore we bring a recap of all the celebrity visits to Lalbaugcha Raja.

Priyanka Chopra, who is a bona-fide Hollywood celeb now, is currently in India and did not miss participating in Ganesh Chaturthi festivities. She visited Lalbaugcha Raja on Sunday along with her mother Madhu Chopra and politician Shaina NC. Priyanka is here to finalise the lead actor of her upcoming Bollywood film. She is awaiting the release of two Hollywood films - Isn't It Romantic? and A Kid Like Jake - apart from her TV series Quantico.

Magnificent #LalbaugChaRaja,we in #mumbai are blessed. @priyankachopra visits @LalbaugchaRaja with humility ,a devotee like all #Mumbaikars https://t.co/7oU4tWLULu

Ajay Devgn visited Bappa in Lalbaug on Day 1. The 48-year-old actor is awaiting the release of Baadshaho, his first film since the box office debacle Shivaay. Ajay's film releases on September 1.

Sanjay Dutt, who stars in upcoming film Bhoomi, visited Lalbaugcha Raja on Tuesday. The Omung Kumar-directed film marks Sanjay Dutt's return to the big screen after the completion of his jail term in connection with the 1993 Mumbai blasts case.

Lalbaugcha Raja is one of Mumbai's oldest sarvajanik Ganeshotsav pandal, which was first organized in 1934. The idol opens for darshan on Ganesh Chaturthi and is kept on display for 11 days and finally bid adieu on Anant Chaturdashi.