"Teaming up once again with my very special Tiger Shroff," wrote Kriti Sanon 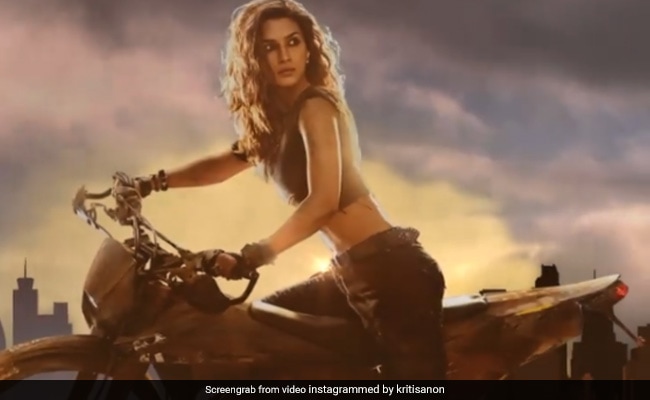 Kriti Sanon and Tiger Shroff are set to share screen space once again after the 2014 film Heropanti, which marked their Bollywood debuts. They will be seen co-starring in the action film Ganapath. The film is will be directed by Vikas Bahl. On Wednesday, Kriti announced her association with the project by sharing her first look from the film and she wrote: "Meet Jassi! Super duper excited for this one! Teaming up once again with my very special Tiger Shroff. Can't wait for the shoot to begin. Let's kill it." Ganapath, a high octane action thriller, will release in 2022.

On Tuesday, the makers of the film shared a poster and asked the fans to guess who the actress is. This is the post we are talking about:

Last year, Tiger Shroff announced his collaboration with director Vikas Bahl and producers Vashu Bhagnani, Vikas Bahl, Deepshikha Deshmukh and Jackky Bhagnani forGanapath. "This one is special for me, and especially for you guys! Presenting #Ganapath - get ready for more action, thrill and entertainment," he wrote while sharing a motion poster.

Tiger's last release was Baaghi 3, in which he co-starred with Shraddha Kapoor and Riteish Deshmukh. He is best-known for starring in films like Student Of The Year 2, co-starring Ananya Panday and Tara Sutaria. He has also featured in films like Baaghi, Baaghi 2, A Flying Jatt and Munna Michael, among others.

Kriti Sanon was last seen in the Ashutosh Gowariker-directed 2020 period drama Panipat, in which she played the role of Parvati Bai, the second wife of Sadashiv Rao. Kriti had a busy year in 2019 with films like Arjun Patiala, Housefull 4 and Luka Chuppi hitting the screens. Her next release is Laxman Utekar's Mimi and Bachchan Pandey, opposite Akshay Kumar.