Game Of Thrones 8 vs Spoilers: The Sneaky Ways In Which HBO Keeps Secrets

Forget the battle for the Iron Throne. The war against spoilers is the real conflict. 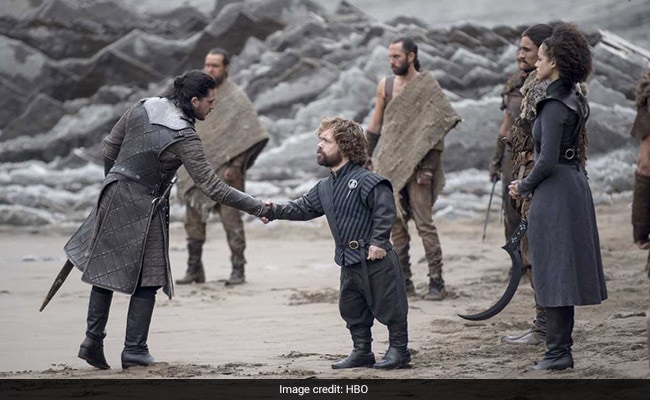 A still from Game Of Thrones 7. (Image credit: HBO)

Kit Harington's Saturday Night Live hosting debut last week included a monologue heavy on Game Of Thrones with one primary through-line: Harington, who plays Jon Snow, refused to reveal how the show ends. It didn't matter who was asking him, be it co-stars Emilia Clarke (she forgot) and John Bradley (HBO wouldn't show him a full script) or his wife and former co-star Rose Leslie (who doesn't actually care how it ends - she just wants to know what they'll do for money).

He wasn't the first to joke about it, either. Maisie Williams, who plays Arya Stark, pretended to spoil the series on The Tonight Show as an April Fools' Day joke. She told host Jimmy Fallon, "When I found out that Arya died in the second episode, I was like -"

Her hands shot to her mouth and she started trembling. (This is an aside, but it shows what a terrific actor Williams is, and it's worth taking a look.)

These bits were riffing on HBO's ironclad battle against spoilers for its most popular enterprise. While this fight has often bordered on the absurd, it's difficult to deny that the show has been about as leakproof as the Mueller investigation.

"It's like protecting your house," showrunner David Benioff, who famously won't reveal secrets of the show to his wife, Amanda Peet, told Entertainment Weekly. "You make it as hard as possible for burglars in hopes that they look for some other house to burgle, but it's impossible to ever completely secure your house."

Security is so tight that the show long ago stopped using paper scripts, which can be easily leaked. Instead, as Nikolaj Coster-Waldau, who portrays Jaime Lannister, told a reporter at Cannes, "They're very, very strict. It's reached a crazy level this year. We actually get the scripts, and then when we've shot the scene - and we only have it digitally - and then when you've done the scene, it just vanishes. It's like Mission: Impossible. 'This will self-destruct.' "

Sophie Turner, who plays Sansa Stark, offered DigitalSpy a bit more insight on these. "We would have it on an app," she said. "We would get sent sides for the scene (we were shooting) the next day. So we would have to learn it all the day before. And once you've read it, it disappears 24 hours later, and you can never access it again. It's tighter than the White House security."

That's only the tip of the iceberg of HBO's deception tactics, however.

Turner added that anyone visiting a set "had stickers on their phones so that they couldn't take photos," and actors and characters had code names on call sheets "so that no one knew who was really going to be on set." The season was also filmed under the fake title Face of Angels," she said.

HBO programming chief Casey Bloys even said the showrunners were filming multiple endings to the show.

But Williams shot the idea down, telling late-night host Jimmy Kimmel in 2018, "Well, I heard this, and I immediately thought, 'I don't think we've got the budget to shoot lots of different endings.' "

Perhaps the most outlandish steps taken to keeping the show's plot a secret came during the filming of Season 7 when the showrunners reportedly did actually create some decoy scenes (though they probably didn't film them).

"We did fake some scenes," Harington said on Kimmel's show in 2017. "We put together people in situations where we knew the paparazzi was around so they'd take photos, and that would get on the internet to fake scenes."

While filming Season 6, they also once brought Sibel Kekilli back on set, dressed as her deceased character Shae, to fool those speculating about which characters might rise from the dead. (It worked.)

It might sound absurd, but as showrunner Dan Weiss told Entertainment Weekly, "One guy hiked 18 hours on foot in the middle of Spain's La Mancha desert to take pictures. Another guy in Northern Ireland crawled through the mud and did his own little private commando mission."

Much of the cast feels similarly.

"You think about all the work you do," Aidan Gillen, who plays Littlefinger, told Entertainment Weekly. "I'd never say anything to anybody - even my closest family members. I take security very seriously. Maybe that's just the Littlefinger in me."

Their caution is not unfounded. Four men were arrested in India after allegedly leaking an episode of the show and demanding a ransom of about $6 million in bitcoin to prevent them from releasing others.