Game Of Thrones 8: Jon Snow Or Daenerys Or Bran Stark - Who's Most Likely To End Up On The Iron Throne!

From Jon Snow to Daenerys Targaryen to Bran Stark (???), here are the names being thrown around for the next ruler of the Seven Kingdoms. 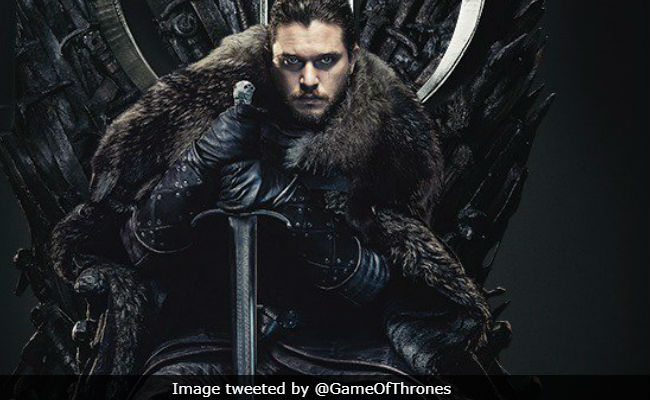 Kit harington as Jon Snow on the promotional poster of Game Of Thrones 8. (Image courtesy: Twitter)

As Cersei Lannister famously said, "When you play the game of thrones, you win or you die."

That's not exactly true, hopefully. Otherwise, Season 8 will just be a string of deaths (which, come to think of it, wouldn't be that far off from any other season). But it's likely someone will sit on the Iron Throne when the final credits roll. The only question is who?

Many names have been tossed around, including unlikely contenders such as Gendry (technically the sole living heir to King Robert Baratheon). But some theories are more sound than others.

This piece is predicated on the hopeful notion that the White Walkers and their Night King don't destroy all of Westeros and kill/convert everyone living there (which would actually be a fitting end to this story). In theory, the Night King could end up on the Iron Throne, but I can't imagine he'd have much use for it. That throne was created by the world's human residents and, thus, is symbolic only to them. If the systems upholding it all disappear overnight, then it just becomes an uncomfortable chair.

Here are the top contenders for the throne.

As always, this post contains a multitude of spoilers. Otherwise, it would be very short.

Were this just about any other television show in history, Jon Snow would end up ruling Westeros. He's nearly unwaveringly virtuous, likes to stare off into the distance thinking of Important Things and would look pretty good with a crown.

He also began as an underdog (being falsely presented as Ned Stark's bastard child), who overcame his (supposed) past to run the Night's Watch and eventually the North. Now it's slowly coming out that he was the child of secretly married couple Rhaegar Targaryen (son of the Mad King and brother to Daenerys) and Lyanna Stark (Ned's sister), who are both dead. There's an incredibly strong argument that this makes the Iron Throne his birthright.

Jon Snow becoming the king would be the logical conclusion of the hero's journey, but Game Of Thrones is all about subverting narrative norms. With that in mind, the best argument for why Jon Snow could sit in the Iron Throne is the fact that he actively doesn't want to.

Meanwhile, the sharpest argument against Daenerys ending up on the throne is how badly she wants it. Ever since the end of Season 1, she's had one primary goal: reclaiming the Iron Throne.

That small point aside, though, she would be a sensible queen.

For those who don't remember, she's the daughter of Aerys II Targaryen, a.k.a. the Mad King. Aerys was assassinated by Jaime Lannister and succeeded by Robert Baratheon, which ended a 300-ish-year rule by the Targaryens, so many believe the Targaryens still have a rightful claim to the throne. Because Daenerys (like most people) doesn't know Jon Snow's true heritage, she seems like the only Targaryen left to claim said throne. (Obviously, things are a little more complicated in reality, something only compounded by the fact that Jon and Daenerys have entered into a romantic relationship).

Also, she has dragons. These creatures are how the Targaryens conquered the Seven Kingdoms in the first place, so there's certainly some precedent for reconquering it with them.

Oddsmakers currently have Bran as the betting favorite to sit on the Iron Throne, which might raise the question, "Wait, what?"

The chance of this unlikely scenario playing out - the brainchild of some truly devoted fans - seems unlikely. But oddsmakers tend to be pretty careful, so let's take a look.

Bran has no particular claim to the throne, and he has two living siblings who might take umbrage with the young man ruling Westeros instead of his extremely qualified sisters. But the fan theory is far more complicated than him coming in and taking over.

Essentially, some believe that Bran and the Night King either are or will become the same person. The argument goes that Bran keeps traveling back in time, trying to stop the Night King (i.e., the first White Walker) from ever being created. Instead, he accidentally becomes him. And, in this theory, he ends up taking over Westeros.

Another smaller theory is that Bran and the Night King end up being opposites, good and evil, and they end up as the final contenders in the final battle. This doesn't make a ton of sense - it seems almost assured that Jon Snow will battle the Night King - but again, "Game of Thrones" is all about upending expectations.

When it comes to the Starks, Sansa seems most likely to sit on the Iron Throne. Her hellish journey has taken her from wanting to be a princess to learning the cold truths of a ruthless world. Though she doesn't agree with Cersei's morality, she did learn a great deal from the current Queen of the Seven Kingdoms, enough to eventually outsmart Littlefinger.

When she returned to Winterfell, she showed a desire to lead, clashing several times with Jon Snow.

Plus, Sansa might be the strongest character on the show. It's not like anyone's had it easy, per se, but Sansa arguably faced the most hardship, save for maybe Theon. But Sansa somehow only grew more confident, more intelligent and more empathetic. That's the kind of ruler this land could use.

No. She might have it now, at least in title, but soon she'll be too drunk to even sit on the darn thing.