"I couldn't be more grateful and happy (and tired)," wrote Gal Gadot 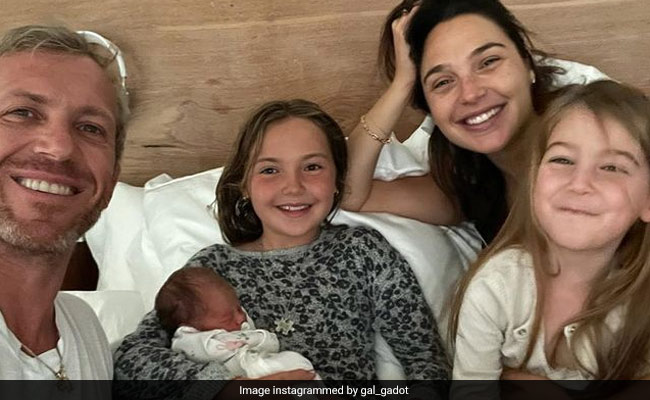 Wonder Woman star Gal Gadot, who welcomed her third child, a baby girl, has named her Daniella. She introduced the world to her third daughter by posting a super cute picture on social media. In the picture, Gal Gadot can be seen happily posing with her family, which includes her husband Jaron Varsano and their daughters Alma, 9, and Maya, 4. Little Daniella can be seen curled up in her sister's arms. "My sweet family. I couldn't be more grateful and happy (and tired) we are all so excited to welcome Daniella into our family. I'm sending all of you love and health," Gal Gadot wrote sharing the picture. Priyanka Chopra, Kate Hudson and other stars sent their best wishes to the new mom.

Gal Gadot and Jaron Varsano got married in 2008. Gal Gadot shared the news of her pregnancy in March this year. Posting an adorable picture, the actress wrote: "Here we go again."

Gal Gadot, best-known to fans of DC cinematic universe as Wonder Woman, will soon be seen in Death On The Nile, an adaptation of Agatha Christie's novel of the same name. The film also stars Kenneth Branagh, Armie Hammer, Tom Bateman, Annette Bening, Russell Brand, Dawn French, Rose Leslie, Sophie Okonedo, Jennifer Saunders, Letitia Wright and Bollywood actor Ali Fazal. She will also star as Cleopatra in an upcoming Hollywood film, the details of which have not been revealed as of now.

Gal Gadot, a former beauty queen, has starred in films such as the Fast And Furious series, Justice League, Criminal, Keeping Up With The Joneses, Batman v Superman: Dawn Of Justice, Kicking Out Shoshana and Triple 9, to name a few.