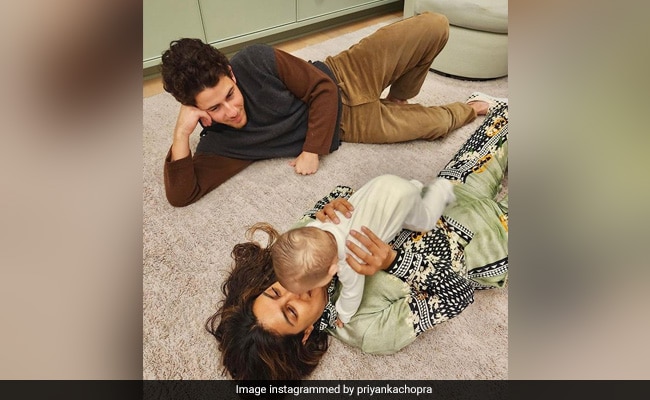 Priyanka Chopra is back to Los Angeles and she couldn't be more excited to be reuniting with her family. The actress, on Thursday afternoon, shared an absolutely adorable picture of herself with daughter Malti Marie curled up in her arms, and husband Nick Jonas by her side. Their smiles say it all. Priyanka Chopra simply captioned the post: "Home." She added a heart emoji, an evil eye emoji and a folded hand emoji along with it. Priyanka Chopra was in India for almost a week. The actress returned to Mumbai after 3 long years. During her stay in Mumbai, Priyanka Chopra was busy with promotional events for her haircare brand. She later checked into Lucknow, where she accomplished her UNICEF duties (the actress has been an ambassador) for quite a few years).

Coming back to Priyanka's adorable Instagram post. We love it when Malti Marie features on her parents' Instagram profiles. Take a look at some of the posts here:

Priyanka Chopra and Nick Jonas met at the grand fashion event Met Gala 2017, where they represented designer Ralph Lauren. The singer had shut down an entire Tiffany's store in New York to pick out Priyanka Chopra's ring. He had proposed to Priyanka on her birthday while vacationing in London. They got married at the Umaid Bhawan Palace in 2018. The couple welcomed their first child, daughter Malti Marie via surrogacy in January this year.

Priyanka Chopra, who was last seen in Matrix 4, will next be seen in Russo Brothers' Citadel. Her next Hollywood project is Love Again, a musical, in which she will co-star with Sam Heughan and Celine Dion. The film was previously titled It's All Coming Back to Me. She will also be a part of Farhan Akhtar's Jee Le Zaraa with Alia Bhatt and Katrina Kaif.