"I started out as an actress. But I never used to like acting," Lata Mangeshkar told NDTV in 2008 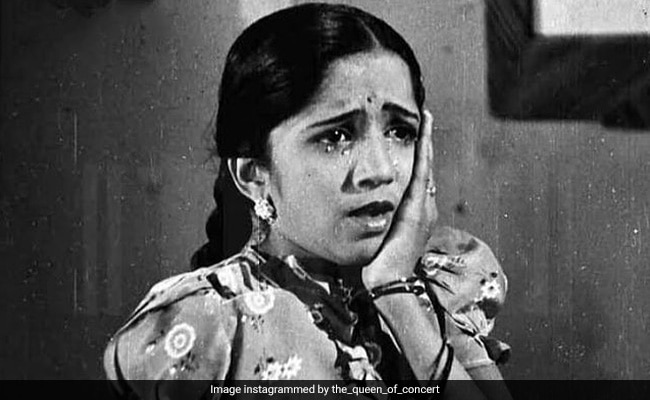 Before she ruled the Indian music circuit, Lata Mangeshkar started her career in the film industry as an actor playing smaller parts to support her family after her father's death. Lata Mangeshkar was named Hema at her birth but her parents had later renamed her as Lata after a female character named Latika, from her father, Deenanath Mangeshkar's play Bhaaw Bandhan. Not many people know that at the age of five, the singing legend had started to work as an actress in her father's musical plays in Marathi language.

In his Hindi biography on Lata Mangeshkar, writer Yatindra Mishra recalls the singer's debut on stage.

Before the start of the play, the young Lata told her father that she would get 'once more' from the audience like he always did. And Lata delivered on her promise. She later played Krishna in her father's production of Gurukul.

In 1942, when Lata Mangeshkar's father had died of heart disease, Master Vinayak Damodar Karnataki, film actor-director and a close friend of the Mangeshkar family, helped the Melody Queen start a career as an actress and singer.

Lata Mangeshkar had sung a Marathi song Naachu Yaa Gade Khelu Saari Mani Haus Bhaari, which was composed by Sadashivrao Nevrekar for Vasant Joglekar's Marathi movie Kiti Hasaal in 1942 but unfortunately the song was dropped from the final cut.

Master Vinayak had offered Mangeshkar a small role in a Marathi movie Pahili Mangalaa-gaur and also made her sing a song Natali Chaitraachi Navalaai.

When Mangeshkar moved to Mumbai in 1945, she started taking lessons in music.

Lata Mangeshkar got the opportunity to play a minor role along with her younger sister Asha Bhosle in Master Vinayak's first Hindi-language movie, Badi Maa in 1945. In the film, she also sang a bhajan, Maata Tere Charnon Mein.

While acting was the need of the hour, she took up small roles in Marathi films like heroine's sister, hero's sister, she never liked putting on make up and working in front of the camera.

"I started out as an actress. But I never used to like acting. I used to work with Master Vinayak. I acted in films but I never enjoyed it as I was very small. I used to hate putting on make up and having to laugh and cry in front of the camera. All this while I used to love singing. I was attracted to it since childhood," Lata Mangeshkar told new channel NDTV in 2008.

Then in 1947, Master Vinayak passed away and their drama company, Praful Pictures, was shut down. "I started playback singing after that," she added.

Then came Aayega Aanewaala, a song in the movie Mahal (1949), composed by music director Khemchand Prakash and picturised on actor Madhubala.

The song went on to become one of her first major hits and what followed, as they say, is history.