From Gauri Khan And Suhana To Maheep Kapoor And Shanaya. Can You Spot All The Stars In This Throwback Pic? 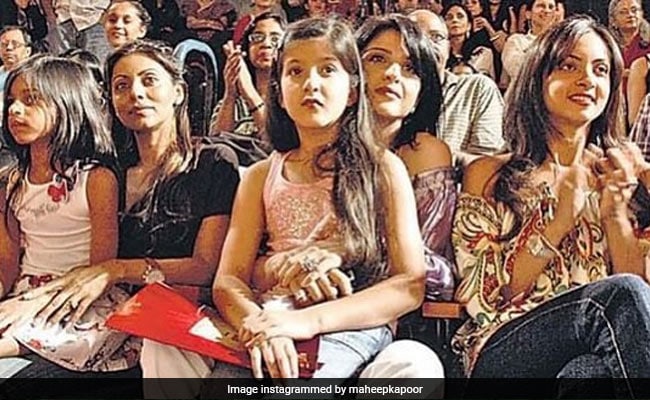 Maheep Kapoor made our Tuesday slightly better by sharing a million-dollar throwback picture on her Instagram profile. In case you are wondering what's so special about the throwback picture, we must tell you that it features lots of Bollywood stars in a single frame. The throwback picture features film producer and Shah Rukh Khan's wife Gauri Khan along with her daughter Suhana, Maheep Kapoor with her daughter Shanaya, and Sohail Khan's wife Seema Khan. Maheep didn't reveal when the picture was taken but it happens to be from Suhana and Shanaya's childhood days. Maheep captioned the post "Squad" and added a heart emoji to it.

Check out the picture shared by Maheep Kapoor here:

How can we forget the "Charlie's Angels" post featuring the trio, which was clicked by Shah Rukh Khan? ICYMI, here's what we are referring to:

Suhana Khan, just like her father, aspires to be an actor. She is SRK and Gauri's middle child and she recently graduated from an acting school. Her elder brother Aryan, 21, studies in California, while younger brother AbRam, 6, stays in Mumbai with his parents.

Shanaya Kapoor, the daughter of Sanjay and Maheep Kapoor, is set to step into Bollywood. However, she will start her career as an assistant director in a film featuring her cousin Janhvi Kapoor.