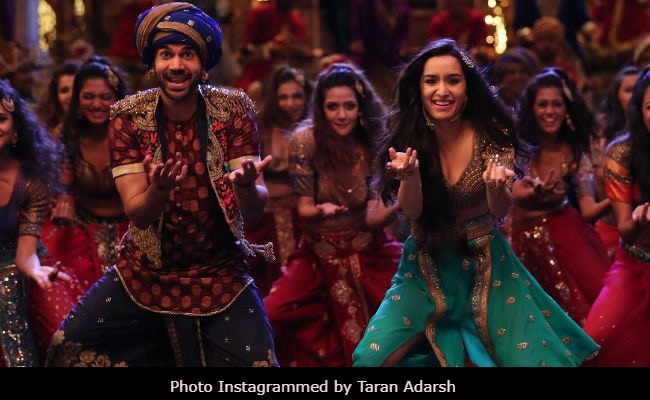 Bollywood's latest hit movie, Stree - which means "woman" in Hindi - is a horror comedy that takes on Indian patriarchy.

In Stree it's the men, not women, locking themselves indoors at night, jumping at the sight of strangers and wearing traditional saris for protection.

It's not your usual song-and-dance blockbuster, but it is making waves. Stree has racked up $11 million at the box office in less than two weeks since its release, a runaway success for a small-budget film featuring up-and-coming actors.

The movie riffs on the fears of Indian society, the everyday restrictions it places on women, and male insecurities of increasingly powerful, independent women. It bends Bollywood's horror genre, which typically depicts women as witches or lusty, evil temptresses.

The movie questions deep-rooted social attitudes toward women, said Yasser Usman, a Bollywood expert and film critic. "You're used to seeing women scared and screaming. This completely twists and turns all that around."

Women's safety is a huge issue in India, brought into focus in recent years by a string of highly publicized gang rapes. But often, people's response to the specter of rape is to double down on rules curbing women's movement outside the home.

The filmmakers - all men, except the editor - decided to take a "feminist angle" on the horror genre because of its relevance to Indian society, said Amar Kaushik, the film's director.

Making their point in an irreverent way seems to have resonated in India, Kaushik said. "If I stand on a podium and dictate my views, people object. When you're funny, and you say things in a joking way, it's all good."

The plot follows Vicky, a tailor in the town of Chanderi, which for four days every year is haunted by a mysterious woman who abducts men and leaves their clothes behind. When Vicky's friend Janaa is abducted one night, he sets off on a mission to find the ghost and save the town from her wrath.

On the way, he learns more about the ghost - and starts suspecting his slightly weird girlfriend. He starts to respect the female ghost and finds out that she reads; he discovers that she is courteous, and she respects the rules of consent.

The success of Stree is due in part to how it flips Bollywood's norms. The male protagonist is the opposite of Bollywood's muscly, macho heroes - he spends most of the film trying to see things from the female ghost's point of view. The women, on the other hand, are bold, educated and fearless.

The movie breaks rules of the horror genre: The scares and jolts are funny, while the real fear is hidden in the jokes about the realities of being a woman in India.

It has struck a note in India, where a growing women's movement has taken hold in recent years.

"In India, a lot of people grow up thinking that women should stay indoors, that they should follow rules," 15-year-old Aditi Malhotra said on her way out of the cinema with her mother and sister. "It's cool to see a movie where women are not in that frame."

The film is based on a popular ghost story from the temple town of Tirupati in southern India, where writers Raj Nidimoru and Krishna D.K. grew up.

There, almost 10 years ago, they noticed that people had started writing a mantra on the walls, "Come Stree, come back tomorrow," to ward off a ghost by inviting her to visit the following night.

That became the germ of the idea. "I thought it was funny how the whole town was buying in to this. I thought, it's the perfect example of mob mentality in India," said Nidimoru, referring to other bizarre phenomena in the country - such as the mass wastage of milk after rumors spread that idols of Ganesh, the elephant god, were drinking it.

From there, the ghost evolved into one that targeted men - and hence, said Nidimoru - "the predator becomes the prey."