For Shanaya Kapoor, "No One Comes Close" To This Favourite Thing

"No one comes closer. Wai wai baby. Thanks dad for the surprise," Shanaya Kapoor captioned her post 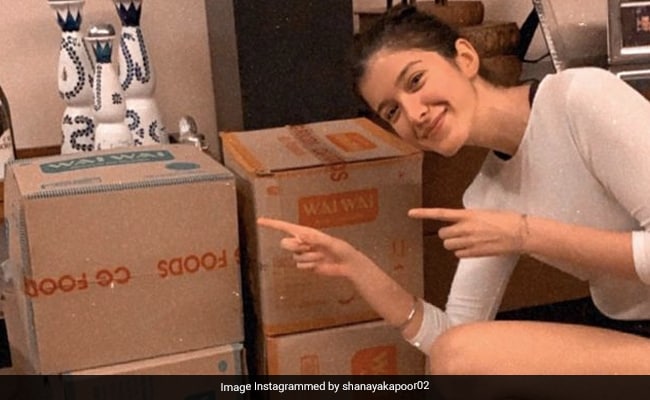 Shanaya Kapoor in a still from her video (courtesy shanayakapoor02)

Shanaya Kapoor's noodle appreciation post is so adorably honest. With the weekend round the corner, Shanaya Kapoor is thrilled to have received a special surprise gift from her father, actor Sanjay Kapoor. Shanaya quickly checked into Instagram to share just a glimpse of her gift and described herself as a "Wai Wai baby." In the photo, Shanaya can be seen posing with crates of Wai Wai noodles and her smile says it all about how happy she is. Shanaya's post is proof of how much of a noodle lover she is: "No one comes closer. Wai wai baby. Thanks dad for the surprise," she wrote.

Sanjay Kapoor knows just how to put a smile on daughter Shanaya's face:

Shanaya Kapoor recently made her Instagram profile open to all and her dance videos are already a bit hit with the Internet. Shanaya, dressed in a white crop top and skirt, picked the song Play Date by Melanie Martinez for her latest dance session.

Shanaya Kapoor is the daughter of Sanjay Kapoor and Maheep Khan. She officially came into the limelight when she made her debut at the Le Bal in Paris in 2019. She has also already joined Bollywood but not as an actor but as an assistant director for Netflix release Gunjan Saxena: The Kargil Girl, which featured her cousin Janhvi Kapoor in the lead role. Shanaya also featured in bits and pieces in Fabulous Lives Of Bollywood Wives.