For Birthday Girl Priyanka Chopra, Kareena Kapoor Sends "Hugs From Across The Globe"

"May you continue to inspire the world," wrote Kareena Kapoor 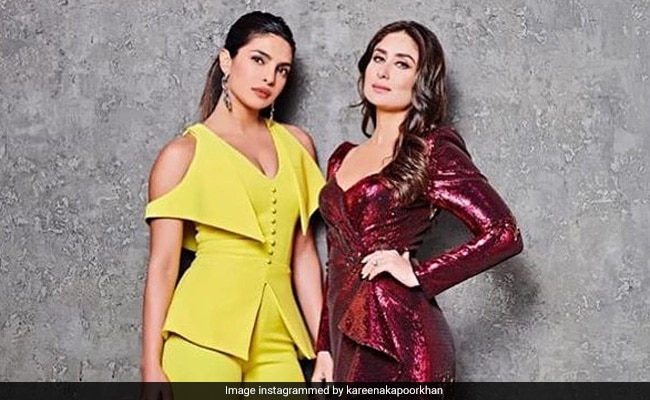 Happy birthday, Priyanka Chopra! As the actress blows 38 candles on her birthday cake today, Bollywood stars wished her on social media. One such wish came from Kareena Kapoor. On Saturday morning, Kareena posted a stunning picture of herself along with the birthday girl from the sets of Koffee With Karan 6, where the actresses appeared together for an episode. In her birthday note for Priyanka, Kareena wrote: "Happy birthday Priyanka Chopra... May you continue to inspire the world. Hugs from across the globe." Kareena added several heart and balloon emojis to her post.

Take a look at Kareena Kapoor's birthday post for Priyanka:

Happy birthday @priyankachopra... May you continue to inspire the world Hugs from across the globe...

Two years back, the duo made an appearance together on the season finale of Koffee With Karan 6 and all was more than well between the actresses. Besides that, Priyanka Chopra joined Kareena Kapoor for an episode of the dance reality show Dance India Dance last year, where the Jab We Met actress featured as one of the judges.

Our kind of face off... Thank you #DanceIndiaDance for having us... so much fun with your talented contestants &... judges See you soon #KareenaKapoorKhan @terence_here @boscomartis @raftaarmusic #TheSkyIsPink in theatres on Oct 11.

Kareena Kapoor and Priyanka Chopra, who worked together in the 2004 film Aitraaz, made seemingly controversial comments about each other on Karan Johar's show in the previous seasons. In 2010, Kareena appeared on the show with Saif Ali Khan and while talking about Priyanka, she said, "Where does she get that accent from?" A few episodes later, Priyanka appeared on the show and when the show's host Karan Johar told her about Kareena's comment, she replied, "The same place where her boyfriend gets it from."