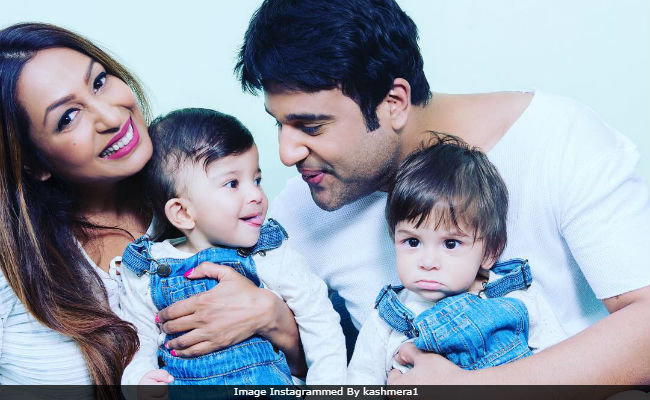 New Delhi: Comedian Krushna Abhishek and his wife Kashmera Shah introduced their children on social media last evening. Their twins, Rayaan and Krishaang, were born via surrogacy last July. "Introducing Rayaan K Sharma and Krishaang K Sharma," Kashmera wrote on Instagram, the picture features the babies with the couple. This was the first picture of the little boys shared by the doting parents. One of them poses happily while another one sports an angry look. (Aww, cute). Rayaan and Krishaang were kept in neo-natal after their birth. "The parents have been visiting the hospital and spending lots of time with their tots," a Mumbai Mirror report had stated.

Actor Govinda, Krushna's uncle, had also checked upon the twins after the news broke out. Sharing a parenting advice with Krushna and said, "And that time I was just laughing and felt like telling him that when you were born, I took you to Vaishno Devi on my shoulders and now you will do the same for your kids, then you will have an idea about the value of love," Pinkvilla reported.

Promoted
Listen to the latest songs, only on JioSaavn.com
Krushna Abhishek is best-known for TV shows like Comedy Circus, Comedy Nights Bachao and The Drama Company. He has also featured in films like Bol Bachchan and Entertainment. He has also starred in several Bhojpuri films. He married Kashmera Shah in 2013.

Kashmera has done supporting roles in films like Yes Boss, Kahin Pyaar Na Ho Jaaye and Wake Up Sid. She is also an alumnus of Bigg Boss and the couple were participants of Nach Baliye 3 and Love Lock Up.