"May life give you all you desire and a cherry on top," he wrote 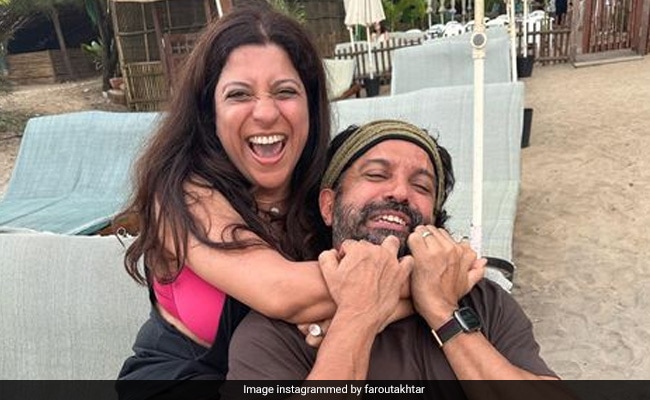 Zoya Akhtar, who is celebrating her fiftieth birthday today, received the most adorable birthday wish from her younger brother Farhan Akhtar. The actor, on Friday evening, shared a cute picture of himself with sister Zoya Akhtar on his Instagram handle. In the picture, Zoya Akhtar can be seen quirkily choking Farhan Akhtar by holding her arms around his neck, while Farhan can be seen struggling to smile for the camera. Sharing the picture, the actor wrote, "Yes! Yes I love you. Happy birthday Zoya Akhtar. May life give you all you desire and a cherry on top."

Farhan's post for Zoya caught the attention of Farhan's wife Shibani Dandekar, who reacted to the post and commented, "Happy birthday Zo" with red hearts.

Zoya Akhtar and Farhan Akhtar are the children of lyricist and screenwriter Javed Akhtar with his first wife Honey Irani. Zoya Akhtar is a film director and screenwriter by profession. Zoya has directed films like Zindagi Na Milegi Dobara (2011), Dil Dhadakne Do (2015) and Gully Boy (2019).

The filmmaker is currently working on her upcoming project The Archies, which will mark the debut of Shah Rukh Khan's daughter Suhana, Amitabh Bachchan's grandson Agastya Nanda and Boney Kapoor's daughter Khushi.

Zoya also made a brief appearance in the Netflix show The Fabulous Lives Of Bollywood Wives.