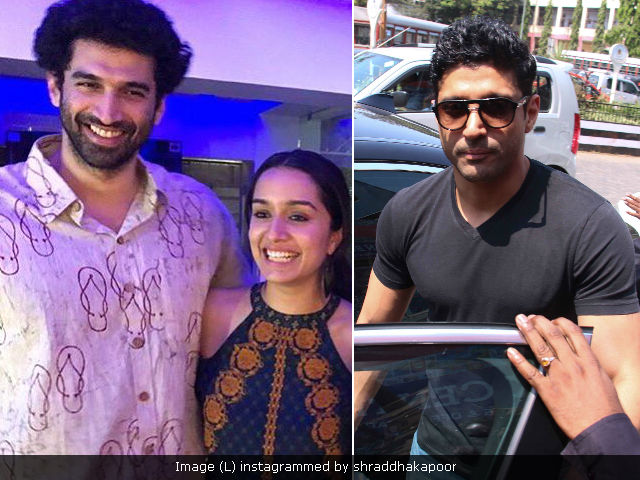 New Delhi: The complicated romantic workings of Bollywood - where people apparently date each other but never ever talk about it - have reportedly thrown up a new love triangle, one in which tempers are currently running high. Actress Shraddha Kapoor's rumoured current boyfriend Farhan Akhtar was allegedly enraged by her appearance at a party with rumoured ex-boyfriend Aditya Roy Kapur, reports Deccan Chronicle. Shraddha and Aditya, co-stars of the films Aashiqui 2 and OK Jaanu, recently attended a party thrown by the Bhatts to celebrate 30 years of Vishesh Films, which produced Aashiqui 2. "Farhan was pretty upset with Aditya and things took a wrong turn from there. As soon as Shraddha got a wind of it, she jumped in to control the damage," a source told Deccan Chronicle, adding that Shraddha also went to Farhan's home to "sort out the issue."

Both Aditya and Shraddha claim Aashiqui 2 as their breakthrough film, which released in 2013, after which they reportedly dated for a while. However, things fell apart for the two and they reportedly separated amicably. Shraddha and Aditya recently collaborated again for Shaad Ali's OK Jaanu, a remake of Mani Ratnam's OK Kanmani. Shraddha and Farhan have allegedly been dating since they filmed Rock On 2 last year - neither relationship has been confirmed by any of the involved parties, needless to say. Farhan Akhtar is separated from Adhuna Bhabani, with whom he has two children.

In January, there were reports suggesting that Shraddha's father, actor Shakti Kapoor, forced her to leave Farhan Akhtar's home, which she was allegedly sharing with the actor. However, the Ek Villain actress told Times Of India: "I got a message from someone telling me about this article, and initially, I was amused. While it doesn't make a difference to me because I know it's not true, it's sad that these false stories go so far that people forget we are human, too. Of course, we are actors and there will be people who would probably want to read something gossipy about us, but when it involves my father, my aunt and my co-star, it's taking it too far."

Promoted
Listen to the latest songs, only on JioSaavn.com
Meanwhile, at the Bhatts' party, Aditya Roy Kapur and Shraddha Kapoor met actress Anu Agarwal, who starred in the original Aashiqui with Rahul Roy. Shraddha shared pictures on Instagram:

Celebrating !!! Will always be so proud to be a part of this. #30YearsOfVisheshFilms #AashiquiMeetsAashiqui2 Shraddha Kapoor is gearing up for the release of her next Mohit Suri-directed film Half Girlfriend, which will hit the screens on May 19. The film, based on Chetan Bhagat's novel of the same name, also stars Arjun Kapoor. Shraddha Kapoor also has Apoorva Lakhia's Haseena: The Queen of Mumbai up her sleeve.