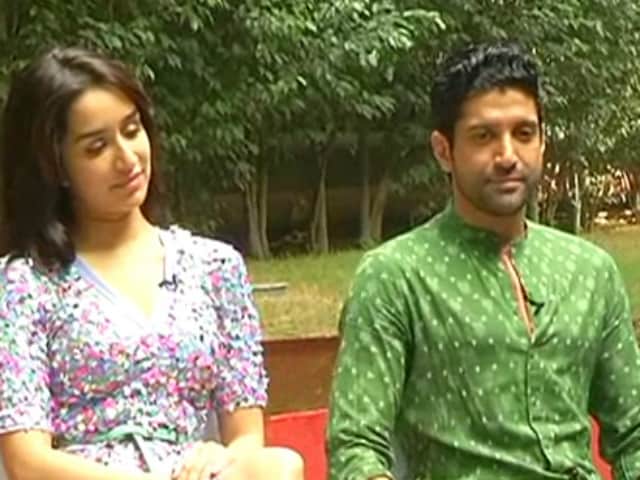 New Delhi: Eight years since Magik struck a chord, the team is back to Rock On once again. A lot has changed since - in Farhan Akhtar's own words - the characters are a bit wiser, a bit older. Yet, the love for music stays the same.

"Music is the best way to sort differences. Have a dialogue, if you ask me, let the warring nations play antakshari if they need to resolve something," said Farhan.

If only wishes were horses. The actor-filmmaker was asked about India's cultural exchange with Pakistan in the current climate of hostility, and with his own fraternity being made to feel apologetic about working with talent from across the border.

Farhan told NDTV: "It's very unfortunate that things have come to this place. I think we should start from there. I think all of us over time, may be at keen moments, should have spoken up but didn't and our silence has empowered people to just keep pushing their agenda forward and it's on both sides. I think as people and government, we need to decide who is it we want to please - we want to please the radical aspect of the other side? They would want us to cut all ties with their country because it suits them. If we want to please them, then let's do it but there are so many people like us here today who also exist in our neighbouring countries, who want peace, who want open trade cultural exchange. Let's focus on pleasing them, empowering them. Let's allow them to also speak out in their society and I think that's the decision that needs to be taken."

When the five crore reparation was imposed by the Maharashtra Navnirman Sena on filmmakers, Farhan announced he wouldn't be coerced into paying it. MNS chief Raj Thackeray suggested that in order to release films with Pakistani actors, Bollywood producers and filmmakers should pay a five crore 'penance' for the army's welfare. The money, however, was rejected by the army. Farhan said: "The army refused, didn't they? That's your answer."

Farhan and his Excel Entertainments co-partner Ritesh Sidhwani's next film, Raees, stars Pakistani actress Mahira Khan opposite Shah Rukh Khan. After the MNS-led outcry over Pakistani actor Fawad Khan's presence in Karan Johar's Ae Dil Hai Mushkil, there was speculation about Mahira being dropped. These rumours were dismissed by sources from Team Raees some days ago and was repeated by Ritesh.

"The government has not banned anyone, have they? They are still issuing visas. Some people throw up an issue to say 'ban this and ban that.' They are going to get a platform to be heard and we should ignore them and move ahead. The government actually has not said to ban or not work with someone and Mahira is in Raees and that's the end of the story," said Ritesh.

Promoted
Listen to the latest songs, only on JioSaavn.com
On a lighter note, it seems Farhan the director may have been taken over by Farhan the actor and Farhan the rockstar. Asked which song describes him best, Farhan said: "Mera Naam Joker." Were a movie to be made on Farhan's life, co-star Arjun Rampal said it should be titled Bhaag Farhan Bhaag. Farhan's own recommendation: Yeh Kab Hua.