“When Karu met Faru... The reel you never knew you needed,” the caption read 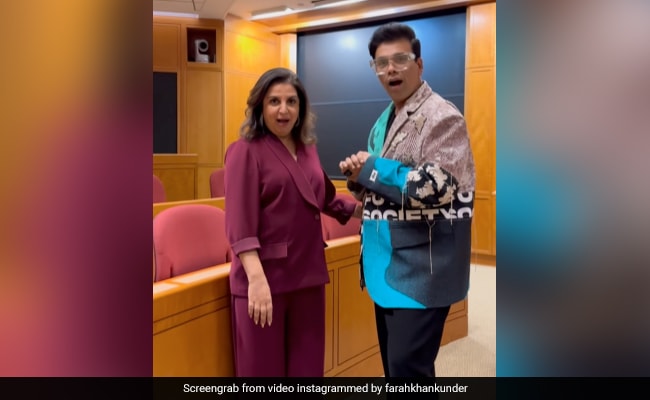 Farah Khan and KJo in a still from the video. (courtesy: karanjohar)

Farah Khan and Karan Johar are back with a rib-tickling video on Instagram. Here, Karan walks into the frame and tells Farah, “Wow. You are such a meticulous person. You even matched the chair.” Then, Farah points at Karan's fancy jacket and says, “And, what about you? This many sofas ka jacket that you are wearing.” KJo being KJo quickly replies, “It is couture. You won't understand.” Ouch, Farah. But that's not it. Farah's reply will leave you in splits. She calls it “kutti-aur.” For the caption, Farah wrote, “When Karu [Karan Johar] met Faru [Farah Khan]... The reel you never knew you needed.” The hashtag read, “karah”.

Karan Johar and Farah Khan's friends from the industry couldn't control their laughter after watching the Reels. Tennis ace Sania Mirza was among the first to drop a comment under the post. She wrote, “Buhaha...I always knew I needed this.” Maheep Kapoor, last seen in the second season of Fabulous Lives Of Bollywood Wives, said, “You guys are mad.” As per actress Rasika Dugal, this Reels was “much needed”. Karan Johar's close friend and Dharma Production's CEO Apoorva Mehta spoke on behalf of all of us when he wrote, “You guys are too funny.” Actress Gautami Kapoor called it “epic”.

Karan Johar and Farah Khan have been working together onRocky Aur Rani Ki Prem Kahani. The film, which marks KJo's return as a director, stars Ranveer Singh and Alia Bhatt in the lead. Dharmendra, Shabana Azmi and Jaya Bachchan are also part of the movie. The much-awaited project will be released on April 28. Karan announced the fantastic news on Instagram with a heartwarming note. It read, “After 7 years, it's time for me to return to my first home - the cinemas. I had the absolute honour of working with not one, but many illustrious actors on the set of my film. The familial nostalgic feeling of an ensemble cast, creating music that captivates the hearts and a story that runs deep to the roots of our family traditions. It's that time again -to huddle with your family and friends, buy popcorn and witness just sheer love and entertainment unfold on the big screen. We're overwhelmed and impatiently excited to finally inform...Rocky Aur Rani Ki Prem Kahani in cinemas on April 28, 2023.”