In pictures shared on Instagram, Vidya can be seen catching up with the rest of Team Tumhari Sulu, comprising co-stars Neha Dhupia, director Suresh Triveni and producer Tanuj Garg, at what appears to be inside a closed-group bash 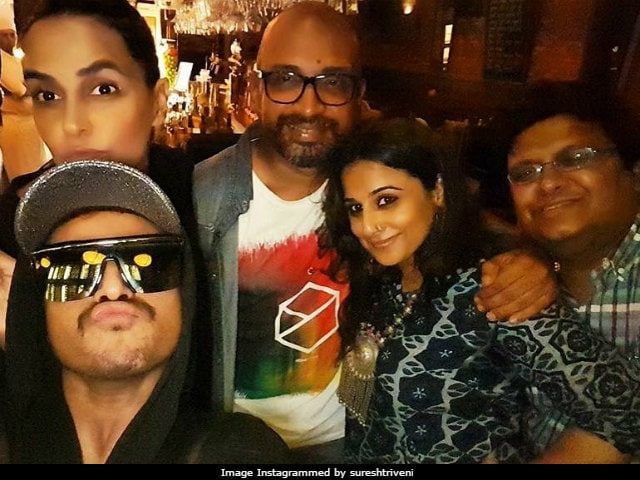 New Delhi: Actress Vidya Balan is not a regular face at Bollywood parties but it appears that the 38-year-old actress has put on her party shoes ahead of her new film Tumhari Sulu. In pictures shared on Instagram, Vidya can be seen catching up with the rest of Team Tumhari Sulu, comprising co-stars Neha Dhupia and Manav Kaul, director Suresh Triveni and producer Tanuj Garg, at what appears to be inside a closed-group bash. "A mad bunch! Happiness unlimited... with the Tumhari Sulu team," Vidya captioned the pictures on Instagram. For the party, Vidya opted for an Indigo printed kurta and her signature ethnic jewellery. Posing individually with Neha and Manav, she literally let her hair down at the party.

Meanwhile, Tumhari Sulu will also have a reprised version of Hawa Hawaii and will feature Vidya Balan as the star of the song. The original Hawa Hawaii song from 1987's Mr India, was also recreated for 2011's Shaitaan. Vidya Balan and Neha Dhupia are expected to have a spectacular choreography in the song. "I am elated to have such a cult number in the film. It plays a key role in the film and is not just a remix for the end credits. Our intention is to pay a true tribute to the original and revive it in its full glory. I am looking forward to the flower power team of Vidya and Neha (Dhupia) to break a leg," the director told Indian Express.

Promoted
Listen to the latest songs, only on JioSaavn.com
Tumhari Sulu tracks the story of Sulochana urf Sulu, who begins a new chapter in her life as a night RJ. Manav Kaul plays the role of her husband. Previously, Vidya has been seen playing a radio jokey in Sanjay Dutt's Lagey Raho Munna Bhai. Tumhari Suluwent on floors earlier this month and is expected to hit screens in December.

Vidya Balan was last seen in Begum Jaan, of which Saibal Chatterjee wrote in his review for NDTV: "Vidya Balan goes all out and delivers a knockout performance as the madam of a brothel."