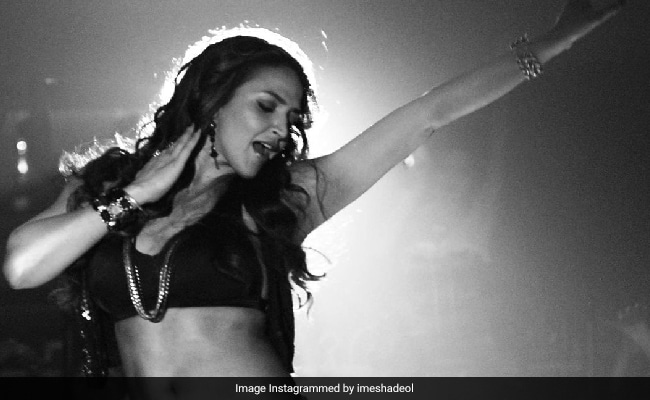 Esha Deol's throwback Thursday post is for all the dance lovers out there. The picture will make you miss your dance sessions. Here, Esha looks engrossed in her performance. It seems that the pic was clicked during one of her stage shows. The all-black look suits her. Caption? She simply wrote, “Throwing it back to the wildness in me.” As for the hashtags, Esha wrote, “throwback Thursday,”  “wild child”, “dance lover”. Fans have flooded the comment section with fire and red heart emojis.”

Esha Deol, who is trained in the classical dance form Odissi, loves to share pictures and videos from her dance session with her fans on Instagram.

Esha Deol is currently busy shooting the web series Invisible Woman. She often shared pictures and fun videos from her shooting diaries. Recently, she was joined by her mother-in-law on the sets of the upcoming web show. She has shared some pictures too. “When your mother-in-law comes and spends the entire day on set with you…You know she really loves you because it takes a lot of patience to sit and watch one filming,” Esha wrote.

Apart from Esha Deol, Invisible Woman also stars Suniel Shetty in a crucial role. It also marks his digital debut with this one. Esha had announced her entry into the project earlier this year. Sharing her look from the show, Esha wrote, "Super kicked to be working in the action-packed series Invisible Woman, a very first by Yoodlee Films with the indomitable Anna, Suniel Shetty. Let's smash it." The series is directed by Tamil filmmaker Rajesh M. Selva.

Esha Deol was last in Ajay Devgn's Rudra: The Edge Of Darkness.In the web series, she played the role of Ajay Devgn's wife. The series was released on March 4. It can be streamed on Disney+ Hotstar.