Sacred Games has been nominated in the Best Drama series category at the Emmys 2019. 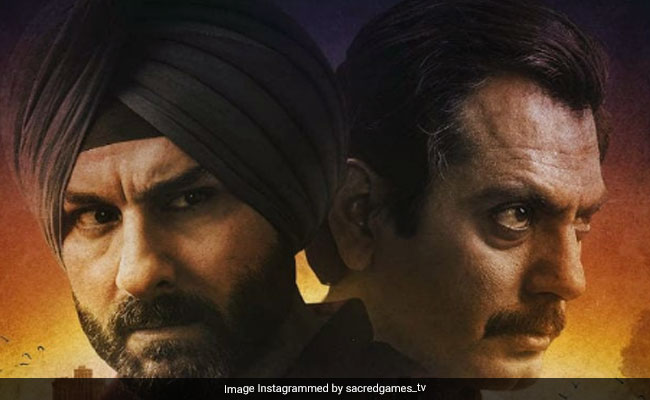 Anurag Kashyap's latest Instagram post calls for congratulations. The director has not one, not two but three big reasons to be happy today. Firstly, the web-series Sacred Games, starring Saif Ali Khan and Nawazuddin Siddiqui (directed by Anurag Kashyap and Vikramaditya Motwane) received an International Emmys nomination for the Best Drama. Secondly, Radhika Apte received the Best Actress nomination for her performance in Lust Stories. Radhika Apte featured in a segment directed by Anurag Kashyap. That's not it, Netflix's anthology film Lust Stories also received an Emmys nomination in the in the TV Movie/Mini Series category.If that's not a reason to celebrate, what is!

Sacred Games showcases the story of a crime lord named and Ganesh Gaitonde (played by Nawazuddin Siddiqui), who challenges a righteous cop Sartaj Singh (Saif Ali Khan), who learns that he has links with the mafia that goes back into the distant past. The show also featured Radhika Apte, Kubra Sait, Surveen Chawla among others.

Meanwhile, Karan Johar, who directed one of the segments of Lust Stories, shared the big news on his Twitter profile on Thursday evening and he wrote: "So proud and excited that our anthology Lust Stories is nominated at the Emmys." In his tweet, the 47-year-old filmmaker thanked his fellow directors Zoya Akhtar, Anurag Kashyap and Dibakar Banerjee and added, "Our quartet rocks. Thanks for the support." The film has received a nomination.

Karan Johar shared a screenshot of the list of all the nominees in the TV Movie/Mini Series category at the Emmys on his Twitter profile. Take a look at Karan Johar's tweet here:

So proud and excited that our anthology #luststories is nominated at the Emmy's!!! Our quartet rocks! #zoya#anurag#dibakar thanks for the support @RSVPMovies@RonnieScrewvala@ashidua_fue and our amazing platform @NetflixIndiapic.twitter.com/htMiyrbRqj

Lust Stories is an anthology which perfectly encapsulates the essence of modern love and its complexities. The film marks the reunion of Bollywood filmmakers Karan Johar, Dibakar Banerjee, Zoya Akhtar and Anurag Kashyap, who have helmed projects from drastically different genres. The quartet previously collaborated to make the 2013 anthology Bombay Talkies.

Lust Stories was jointly produced under Ronnie Screwvala's RSVP movies and Ashi Dua's Flying Unicorn Entertainment. The film was distributed by Netflix India and it premiered on June 15 last year.