Nawazuddin Siddiqui Thanks Author Paulo Coelho For Appreciation Post: 'It's An Honour To Be Noticed By Someone Like You'

"I have always been an ardent fan of your writing," wrote Nawazuddin 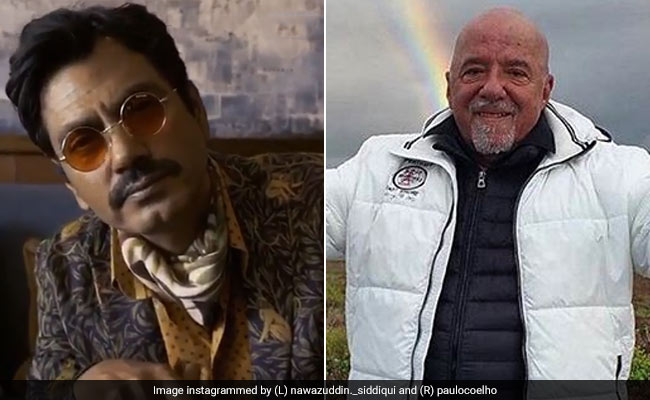 It's a fanboy moment for Nawazuddin Siddiqui as renowned author Paulo Coelho praised his amazing acting skills in Netflix's Sacred Games 2and called him a "great actor." The 45-year-old actor thanked the noted author on Sunday and called himself "an ardent fan" of Paulo Coelho. Nawazuddin Siddiqui added that it's an honour for him to be noticed and mentioned by someone like Paulo. On Saturday, Paulo Coelho shared the link of Netflix's Sacred Games and wrote: "One of the best series on Netflix, with the great actor Nawazuddin Siddiqui." Reacting to the compliment, Nawazuddin replied: "Sir Paulo Coelho. I have read your books The Alchemist and also watched the film Veronika Decides To Die based on your novel. I have always been an ardent fan of your writing and it's an honour to be noticed and mentioned by someone like you. I don't have words to describe the feeling."

Paulo Coelho is a Brazilian novelist, who is best-known for his works such as Eleven Minutes, The Pilgrimage, The Alchemist, The Spy, The Valkyries, The Winner Stands Alone and The Devil And Miss Prym.

And now, here's a glimpse of Paulo Coelho and Nawazuddin Siddiqui's Twitter exchange:

One of the best series on Netflix, with the great actor @Nawazuddin_Shttps://t.co/LrEo5vLhTE

Sir @paulocoelho I hv read ur books The Alchemist & also watched d film 'Veronika decides to Die' based on ur novel I hv always been an ardent fan of ur writing & it's an honour 2 be noticed & mentioned by someone like you I don't have words to describe the feeling
Thank You https://t.co/wNyhg5ltog

On the work front, Nawazuddin will next be seen in Bole Chudiyan, which marks the directorial debut of his brother Shamas Nawab Siddiqui. The film is produced by Rajesh Bhatia and Kiran Bhatia under their banner Woodpecker Movies.