Homegirl Deepika Padukone, ranked #10 in 2016, has not made the cut this time 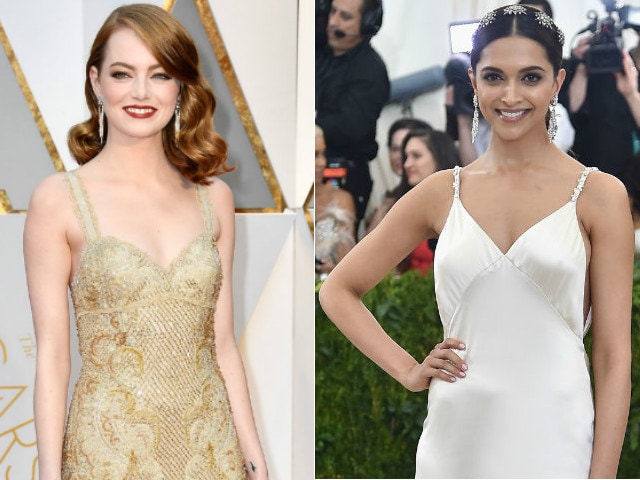 New Delhi: Forbes has released this year's list of the world's 10 highest paid actresses and homegirl Deepika Padukone, ranked #10 in 2016, has not made the cut this time. As Forbes put it: "The list examined actresses the world over, but no stars from Asia made the cut, as Fan Bingbing and Deepika Padukone dropped off due to quieter years." Deepika's starring role in xXx: The Return Of Xander Cage - also her Hollywood debut - contributed hugely to her earnings of $10 million last year. She has no international project currently and is working on one film at home - the period drama Padmavati, co-starring Ranveer Singh and Shahid Kapoor. Also absent from Forbes' 2017 list is Scarlett Johansson - this is the first time in three years that she hasn't made the grade.

So who is on the list? Emma Stone, Oscar-winner for La La Land, is #1 for the first time, with Forbes reporting earnings of $26 million. Jennifer Lawrence, who topped the list two years in a row, has slipped to third place, behind Jennifer Aniston. The Jennifers are at $25.5 and $24 million respectively - JLaw made just half of her 2016 total.

The top three on the list of 10 are the only actresses to have made over $20 million. They are followed by Melissa McCarthy, Mila Kunis, Emma Watson, Charlize Theron, Cate Blanchett, Julia Roberts and Amy Adams.

Forbes reports a 16% drop in the cumulative earnings of the world's top actresses - $172.5 million this year, down from $205 million in 2016. Forbes also notes that half the actresses on the list are over 40 - Jennifer Aniston, Melissa McCarthy, Charlize Theron, Cate Blanchett, Julia Roberts and Amy Adams - a significant achievement given the scarcity of roles for women their age. Forbes also flags another ugly truth - only 28.7% of speaking roles in films are filled by women.

Awaited, the list of the 10 highest paid TV actresses on which Priyanka Chopra might find a place, as she did last year.

Here is the full list of the world's highest paid actresses and earnings as ranked by Forbes:

Promoted
Listen to the latest songs, only on JioSaavn.com
9. Julia Roberts - $12 million

What Taapsee Pannu Wrote About Her Post-Vacation Skin