Can you spot Ekta Kapoor in this throwback 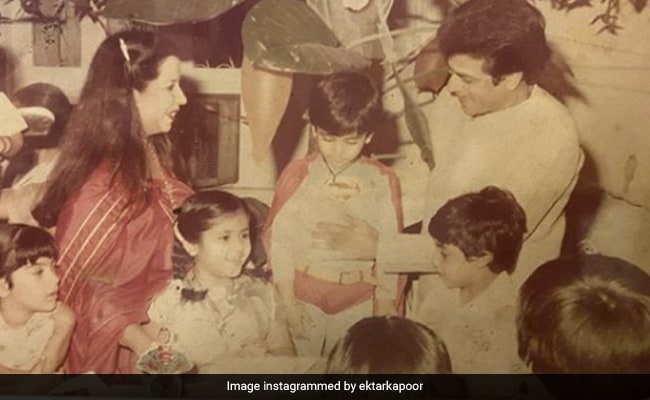 Ekta Kapoor has an impressive collection of throwback photos and she shares them with her Instafam every now and then. Ekta recently posted a cake appreciation post, which is an adorable childhood memory from what appears to be Tusshar Kapoor's birthday. In the photo, Jeetendra and Shobha Kapoor can be seen posing with birthday boy Tusshar Kapoor while Ekta is standing by the cake because: "It was your b'day but I only want the cake," she wrote. Ekta Kapoor has also tagged Riddhima Kapoor Sahni to the photo, who just couldn't believe she was part of the birthday party: "Is that me at the back?" she wrote in the comments section.

It was ur bday but I only want d cake #majorthrowback

Earlier this month, Ekta shared yet another throwback, with which she gave herself a shout-out for her body confidence. "Me with my cousins! Not that I'm a fan of body shaming! But full marks for that smirky confidence," Ekta Kapoor captioned the blast from the past.

Me with my cousins!!!! Not that I'm fan of body shaming !!! But full marks for that smirky confidence

In her words, Ekta Kapoor "has come a long way" since this photo was clicked:

Well well! We have come a long way! Guess wat my dad is thinking 😹😹😹😆