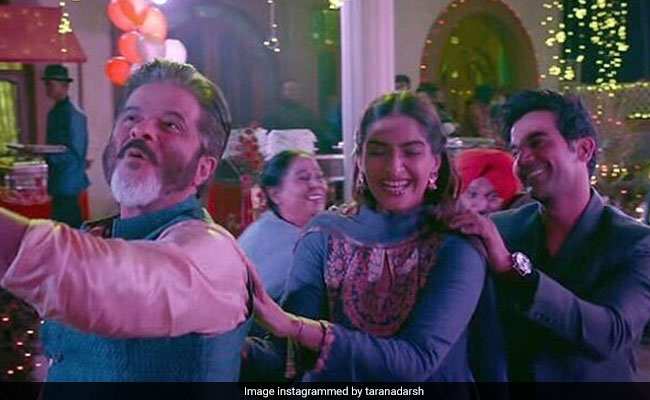 Anil Kapoor, Sonam and Rajkummar Rao in a still from the film (Image courtesy taranadarsh)

According to a Box Office India report, the subject of Ek Ladki Ko Dekha Toh Aisa Laga has been "rejected" by audience hence the "poor" box office numbers. "The film has remained poor at the box office. There was 40 per cent growth on Saturday which can be regarded good for some films but for this film which did not open and the bulk of the business coming from multiplexes which have the best growth on Saturday it is a bad result. The subject matter of the film has been rejected outright which is no surprise," the report stated.

Ek Ladki Ko Dekha Toh Aisa Laga opened to positive reviews from the critics. Film critic Saibal Chatterjee in his review for NDTV gave the film 4 stars out of 5. "The story is simple enough and is told in a manner that could be faulted for being overly chaste - the same-sex lovers embrace a few times but they do not as much as plant a kiss on each other's cheeks, let alone lips - but the film achieves something far bigger than a Bollywood crowd-pleaser can. Ek Ladki Ko Dekha Toh Aisa Laga is a significant film because of its provenance (it comes from Vidhu Vinod Chopra's production stable) and also because of the support of Bollywood actors who've dared. The warmth and wry wit that the film is couched in makes it that much better," he wrote.