Akshay posted a picture of Bhumi Pednekar on Instagram seeking blessings on the first day of her shoot. 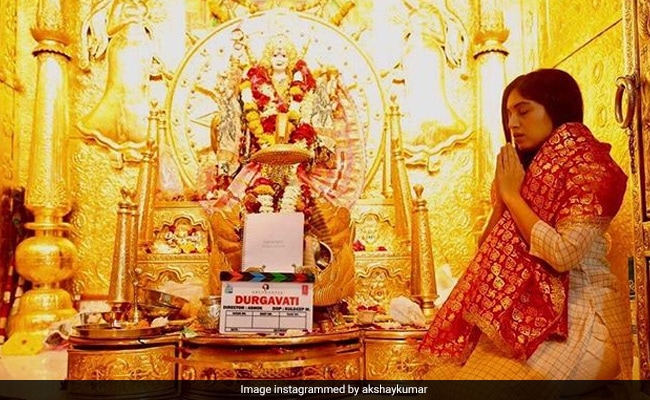 Akshay Kumar's new production Durgavati went on floors, as promised in a tweet from November last year. The actor-producer had announced his first horror-thriller production starring Bhumi Pednekar in a titular role. The actor gave us a sneak-peak into the film's shubh aarambh. Akshay posted a picture of Bhumi Pednekar on Instagram, in which she can be seen seeking blessings on the first day of her shoot. In the post, Akshay has asked his fans for their "best wishes" saying, "Durgavati begins, with blessings and good vibes, as always need your best wishes as well." The lead actress of Durgavati has also posted the same picture on Instagram. She has captioned her post, "With her blessings we start Durgavati. Need all your support and love as I start the most special film of my career. Akshay Kumar sir, I am ready to stand tall and strong."

Take a look at Akshay and Bhumi's posts here:

With her blessings we start #Durgavati Need all your support and love as I start the most special film of my career. @akshaykumar sir I am ready to stand tall and strong :) #AshokG sir @ivikramix @shikhaarif.sharma #CapeOfGoodFilms @abundantiaent @mahieg Let's do this #ChanchalChauhan #Gratitude @bhushankumar @tseriesfilms @tseries.official

Regarding Bhumi Pednekar's role in the film, in an interview with news agency PTI, she was quoted saying, "Durgavati is going to take me in horror space. It is the most challenging and special film for me, as it is for the first time, the responsibility will be on my shoulders. Durgavati is something I'm most pressured and excited about. Akshay sir is a genius, I respect him."

The 30-year-old actress will be shooting in Bhopal for her upcoming film Durgavati. She had recently posted a video on Instagram about the same and wrote: "Off I go in style."

Have a look at her picture here:

Off I go in style #Durgavati #Bhopal . . . @trunkhouseindia @dkny @gentlemonster

Durgavati is a Hindi remake of a Telugu film Bhaagamathie starring Baahubali actress Anushka Shetty. Filmmaker G Ashok will be directing the film who had originally helmed the Telugu version of the movie. Durgavati is based on a true accident which took place in Mumbai. The film also stars actor Vicky Kaushal as reported by PTI.