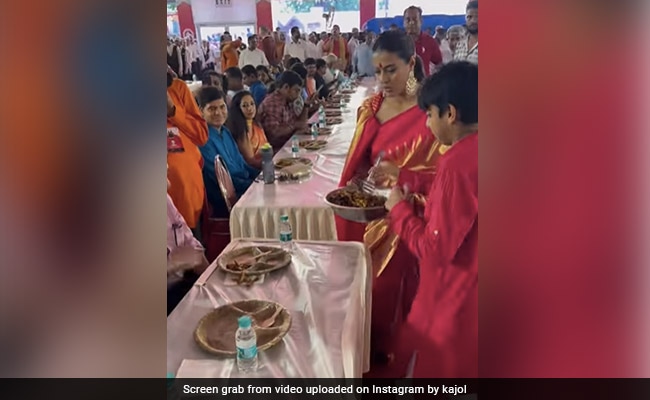 Do not disturb Kajol. She is busy celebrating Durga Puja with her family. The actress has shared a heartwarming video of herself and her son Yug from the Maha Saptami puja festivities. Continuing the “tradition,” Kajol and her family served bhog to those who visited the puja pandal. In the clip, Kajol can be seen wearing a gold saree with a red border and holding a large bowl of bhog. Yug walks ahead of her and serves bhog to the guests, sitting in a queue. “So proud of my son serving at the pujo. Mistakes and all… the tradition continues,” wrote Kajol in the caption and added the hashtags “Durga Puja,” “Proud mom” and “Blessings received.”

On Kajol's post, her sister Tanishaa Mukerji dropped two red hearts and a high-five emoji. Actress Divya Dutta said she would love to attend Kajol and her family's Durga Puja celebrations. She commented: “So lovely. I wanna come too.” Lyricist Niranjan Iyengar, who is a good friend of Kajol, also dropped red heart emojis in the comments section.

Every year on Durga Puja, Kajol gives her fans a sneak peek into her family festivities. From the pandal decorations to Goddess Durga's idol, every glimpse of the celebration is wonderful.  Similarly, on Sunday, Kajol shared a photo of devotees “getting Maa (Durga) ready.” Kajol also uploaded a video from the aarti. Take a look: 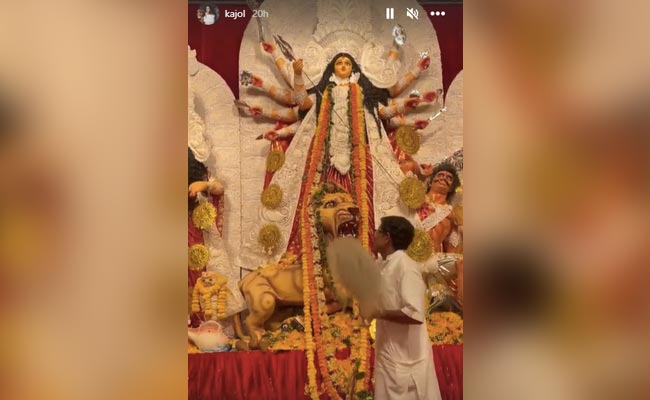 Kajol and her sister Tanishaa Mukerji make it a point to celebrate Durga Puja with their mother, veteran actress Tanuja, in Mumbai every year. Tanuja is known for her performances in movies like Jeene Ki Raah, Suhaagan, Swarg Narak, Haathi Mere Saathi, Bandish, Anokha Rishta and Jewel Thief.

Kajol was last seen in the Netflix film Tribhanga. It was her OTT debut, directed by Renuka Sahane and produced by Ajay Devgn. The actress is currently working on her next film, titled Salaam Venky, which is based on a true story.