Dunki is being directed by Rajkumar Hirani 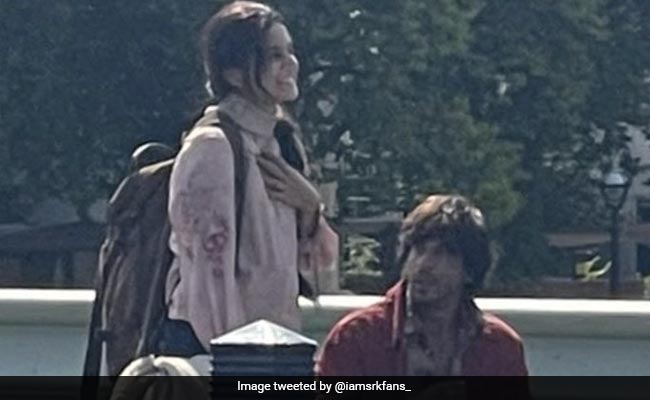 Shah Rukh Khan is busy shooting for his forthcoming film, Dunki, in London. The Rajkumar Hirani-directorial is one of the three films on SRK's list of projects that are set to release in 2023. Dunki also stars Taapsee Pannu. A photo of SRK and Taapsee from the sets of Dunki in London is making the rounds of the Internet. The picture has Shah Rukh Khan in a check shirt with a red jacket and messy hair. Taapsee also wears casuals in the viral image, carrying a backpack.

Take a look at the viral picture below:

#ShahRukhKhan Latest from the set of #Dunkipic.twitter.com/zwtwJx7bK8

A picture of Shah Rukh Khan posing with two chefs at a London restaurant went viral last week. The actor wore a white shirt with dark sunglasses and a black jacket, flanked by his fans. Take a look at it below:

Taapsee spoke about working with SRK in Dunki, calling it a "golden opportunity". She was quoted by PTI as saying, "When you end up getting the opportunity to work with him (SRK), it becomes the golden opportunity. And combine with the fact that it is going to be directed by Rajkumar Hirani, whose films are classics, it doesn't get better. I don't know how will I even ever up it."

Shah Rukh Khan will also feature in Siddharth Anand's Pathaan with Deepika Padukone and John Abraham. He has also collaborated with Atlee for Jawan co-starring Nayanthara.

Taapsee will feature in the films Dobaaraa, Blurr and Woh Ladki Hai Kahaan?