The veteran actor has shared a few pictures and a fun video featuring himself, his brother Raju Kher and their mom Dulari Kher 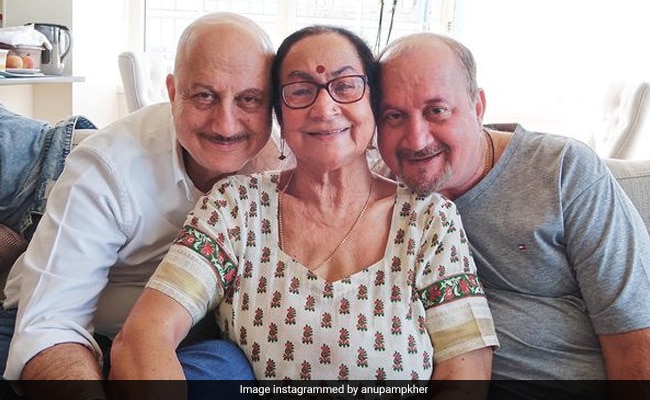 And, the award for the best birthday post goes to Anupam Kher. It's his mother's birthday. And, the actor, who often shared videos and pictures of his mother under the hashtag “Dulari Rocks”, has penned a heartwarming note to mark the day. The veteran actor has shared a few pictures and a fun video featuring himself, his brother Raju Kher and their mom Dulari Kher. This birthday special album screams family goals from miles away. And, now, let us take a look at the note shared by Anupam Kher. “Doston. Aaj humari yani Bittu/ Raju ke maa aur aap sabke pyari Dulari ka birthday hai. Magar maata Shimala, Raju Mumbai aur main Lucknow mein hoon. Isliye aap sab maa ko dher saari shubha kaamanaen bhejie. Zor se bolo jay Mata di. [Friends. Today is my mother's and everyone's favourite Dulhari's birthday. But Mom is in  Shimla, Raju in Mumbai, and I am in Lucknow. Send your warm wishes.]”

On Mother's Day, Anupam Kher shared a special video of his mother along with a heartwarming note. Here, Dulari Kher is talking about her favourite sweets and childhood days. For me, everyday is a MothersDay. But for those who are celebrating it today, here is a long video of Dulari where she talks about million things! From her favourite mithai [sweet], to us making halwa as children to monkeys to calling me bewakoof kahi ka to her injuries to our injuries. Enjoy this hilarious Mothers Day special. And give your mothers a long never-ending hug.”

Anupam Kher also has the ABC comedy pilot The Son in Law in his kitty.