In one of the photos, Yami can be seen smiling at Aditya Dhar 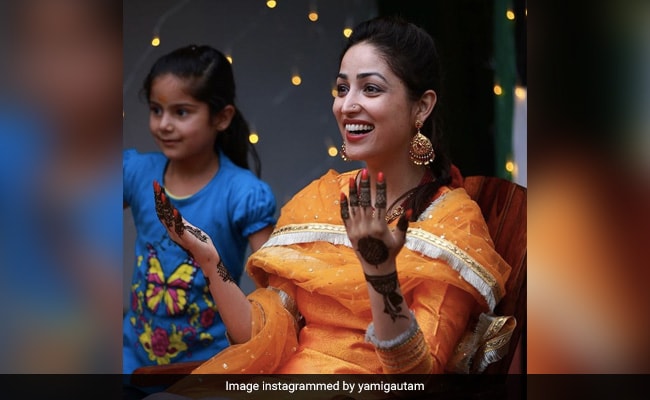 After a beautiful picture from her wedding ceremony, actress Yami Gautam treated her fans to dreamy photos from her mehendi ceremony. Yami married Uri director Aditya Dhar recently and announced the news on social media on Friday. In her latest set of pictures from her pre-wedding festivities, Yami Gautam looks every bit of stunning in an orange kurti set. In one of the photos, she can be seen smiling at Aditya Dhar while in another, she can be seen laughing with all her heart. She quoted poet Lalleshwari in her caption and wrote: "'O dear one, why worry? What is meant for you will always, always find you'."

Yami's friends from film industry such as Kirti Kulhari, Vaani Kapoor, Kajal Aggarwal, Tahira Kashyap and Jacqueline Fernandez were all praise for the actress' traditional look in the comments section of her post.

Kirti, who co-starred with Yami in Uri: The Surgical Strike, wrote: "Heartiest congratulations to you both sweetheart. Loads of love and best wishes." Jacqueline, who will feature alongside Yami in Bhoot Police, commented: "Yamiiiiiii soooo beautiful!" with red heart icons while Kajal wrote: "You beautiful soul."

Yami Gautam and Aditya Dhar announced their wedding with this picture and caption: "With the blessings of our family, we have tied the knot in an intimate wedding ceremony today. Being very private people, we celebrated this joyous occasion with our immediate family. As we embark on the journey of love and friendship, we seek all your blessings and good wishes."

Yami Gautam and Aditya Dhar worked together in the 2019 film Uri: The Surgical Strike.

Laal Singh Chaddha: This Video Of Aamir Khan And Kiran Rao Dancing Together In Ladakh Is Now Viral