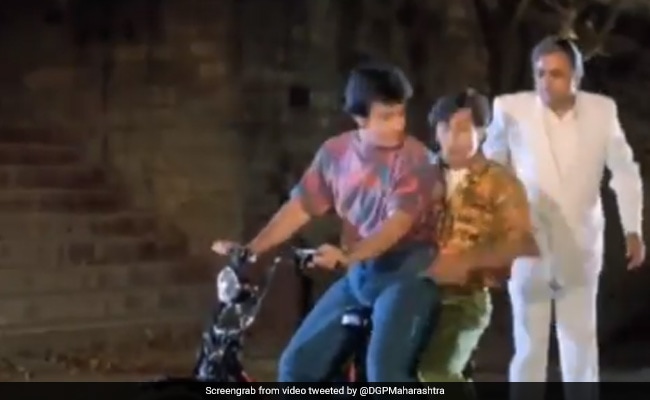 Maharashtra Police wins Twitter today with this epic post - a double whammy celebrating 25 years of cult comedy Andaz Apna Apna while also telling off Nike-tripling offenders. "Don't drive triple-seat and be a 'kachcha khiladi,'" reads the post, shared as a caption to one of the many unforgettable scenes from the 1994 film starring Aamir Khan and Salman Khan as bumbling slackers competing for the hand of a poor little rich girl. Andaz Apna Apna fans won't even need to look to find out which scene the Maharashtra Police picked - it's the one in which Amar and Prem, the aforementioned slackers, ride a bike to ransom the father of the object of their affection (although by this time, their affections have been divided between the rich man's daughter and her friend). The father, played by Paresh Rawal, has been kidnapped by his evil identical twin, also played by Paresh Rawal, with the express purpose of switching places. It's the villainous Teja whom Amar and Prem end up rescuing, and in order to get home on the two wheels that brought them there, they have to triple.

"Kachcha khiladi lagta hai" is just one from the arsenal of one-liner salvos that Andaz Apna Apna, a meme-worthy movie if ever there was one, is peppered with.

Andaz Apna Apna co-starred Raveena Tandon and Karisma Kapoor as the young women who Amar and Prem first set out to entrap and then fall in love with. Shakti Kapoor played the hilarious Crime Master Gogo, a self-confessed scoundrel almost as inept as his victims, despite sharing the same gene pool as iconic evil overlord Mogambo (or so he says). The cast also included Javed Khan, Viju Khote and Shehzad Khan. Veteran comics Jagdeep and Deven Varma played Amar and Prem's hapless father's while Mehmood appeared as a shady film producer. Govinda and Juhi Chawla had cameos as themselves.

Directed by Rajkumar Santoshi, Andaz Apna Apna cut no ice with either critics or audiences when it released 25 years ago. Over time, however, it has been elevated to cult status and talk of a sequel keeps getting oxygen every so often.