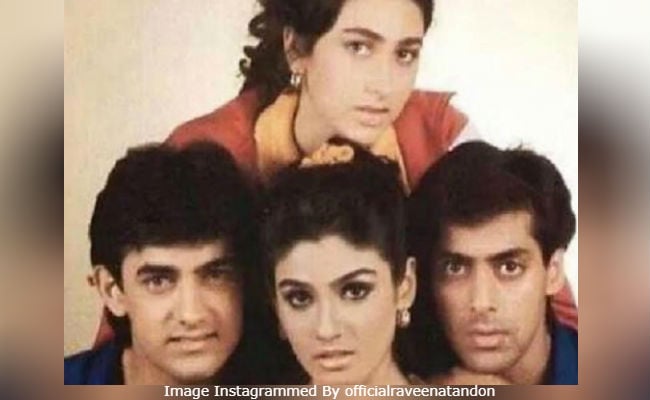 Thank you for the picture, Raveena Tandon (Image courtesy: officialraveenatandon)

Raveena Tandon has made us and the Internet very happy by sharing this epic throwback photo, featuring her Andaz Apna Apna co-stars Aamir Khan, Salman Khan and Karisma Kapoor. Andaz Apna Apna tanked at the box office when it released in 1994 but several years later, it entered the list of top Bollywood comedy films. "Epic picture" and "all-time favourite film" are some of the comments posted on the picture. Our favourite - "Arre Amar, Prem." Amar and Prem were famously played by Aamir and Salman, respectively. Raveena was paired opposite Aamir while Karisma played Salman's love interest. Take a look at the picture here.

A few reports earlier suggested that Andaz Apna Apna would be remade. However, there's no recent update about it. The rights were reportedly bought by Phantom Films (owned by Vikas Bahl and Anurag Kashyap) in 2016. It was recently reported that Sushant Singh Rajput will be a part of the film. But again, there's no confirmation on it.