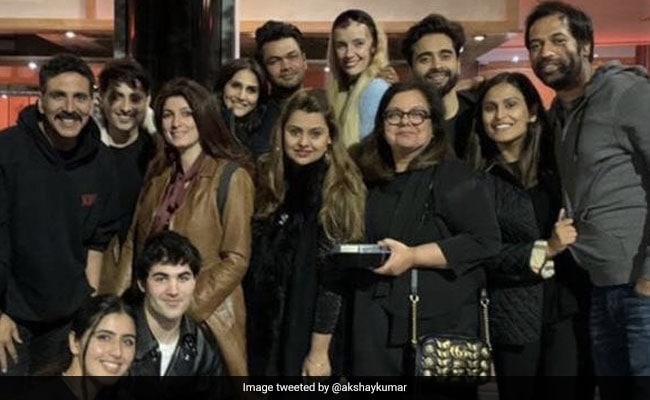 Akshay Kumar and the team of his forthcoming film Bell Bottom, recently wrapped up the Glasgow schedule of the film and began shooting in London. On Tuesday, the actor posted a picture of himself along with the film's team and he wrote in his caption: "So many happy faces in one frame...That's the result of a good schedule." Akshay Kumar's wife and author Twinkle Khanna and their kids Aarav and Nitara, who left for UK in August, can also be seen posing for the picture. "Goodbye Glasgow, hello London," added Akshay Kumar. Bell Bottom is the first film to shoot at an international location since productions were stopped because of the lockdown.

So many happy faces in one frame...that's the result of a good schedule. Goodbye Glasgow, hello London #BellBottom@Vaaniofficial@ranjit_tiwari@jackkybhagnani@honeybhagnani@poojafilms@EmmayEntertainpic.twitter.com/aXsKFTuMF7

Akshay Kumar shared his first look from the espionage drama, last year. He wrote: "Get ready to go back to the 80s and hop onto a roller-coaster spy ride Bell Bottom." ICYMI, check it out here:

Other than Akshay Kumar, the film also stars Vaani Kapoor, Huma Qureshi and Lara Dutta. The film was announced in the year 2019 and it will collaboratively be produced by Vashu Bhagnani, Jackky Bhagnani, Deepshikha Deshmukh, Monisha Advani, Madhu Bhojwani and Nikkhil Advani.