Does Spider-Man: Far From Home's Big Reveal Hint At Marvel's Next?

Who knew Spider-Man and Captain Marvel were so connected? 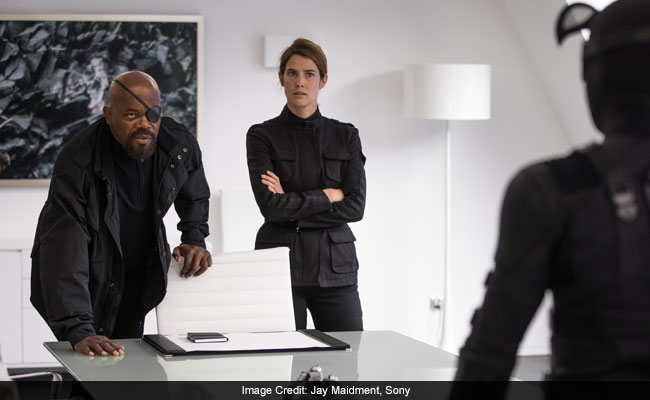 Spider-Man: Far From Home has been called the end of the Avengers' Infinity Saga, but one key end-credits scene could be a major clue as to what the next big event at Marvel Studios might be.

The not-so-shocking Mysterio twist (did anyone think he wasn't going to be the bad guy?) and the triumphant return of J. Jonah Jameson weren't the biggest surprises in the Spider-Man sequel. That honor goes to Talos and Co., aka the shape-shifting Skrulls who recently debuted in Captain Marvel. And they didn't just pop up at the end of the film, but rather seem to have been in disguise as Nick Fury and Maria Hill for the entire movie.

As big a reveal as that was, it actually made Far From Home make a little more sense. Nick Fury seemed a little off for most of the movie - mainly because he fell for the deception of Mysterio for so long. You simply don't get one over that easily on the real Fury, the know-it-all boss of the Avengers who is always one step ahead. ... Well, except for that one time he discovered that Hydra had secretly infiltrated his S.H.I.E.L.D. organization in Captain America: The Winter Soldier, and that Hydra had been causing carefully calculated chaos for decades and turned Captain America's long-thought dead best friend Bucky into a ghost-assassin. ... But other than that, nothing gets by Fury.

It turns out the real Fury was in space with a colony of Skrulls, receiving updates from Talos on what was happening with Tony Stark's heir apparent, Peter Parker/Spider-Man. So, when did the Fury/Talos switch take place? Odds are that Fury and Captain Marvel reunited at Stark's funeral in Avengers: Endgame and had a quick meeting to plan out the future. But what if the switch happened before that? Let's not forget, we just learned about Fury and Captain Marvel's first meeting in the early '90s (where both eventually became allies of the Skrulls) in her debut movie in March.

The idea of a multiverse, which was hinted at by Mysterio in Far From Home's" trailers, was more or less eliminated when it was revealed that Mysterio (we think) made it up. For now, that puts to rest the fan theories that "Secret Wars" (a story that deals with multiple universes) could be the big Marvel comic-book saga used for the next Avengers get-together.

But that Skrull kicker wouldn't be in this Spider-Man film if it wasn't meant to have huge ramifications. Perhaps if not Secret Wars, a Secret Invasion?

The Secret Invasion story was about the Skrulls secretly replacing the identities of multiple Marvel heroes in a plot to take over the Earth. While that goes against the current (and surprising) MCU narrative of the Skrulls actually being the good guys, it could possibly be a source of Marvel Studios inspiration now that the alien race plays such a big part in the new films.

Is every Skrull a good person though? Can we put our faith in Talos? Fury and Captain Marvel, the most powerful Avenger of all, seem to trust them.