Diwali 2020: Amitabh Bachchan And Jaya Light Up Instagram With Blast From The Past

In the black and white throwback photo, Big B and Jaya can be seen celebrating Diwali with sparklers 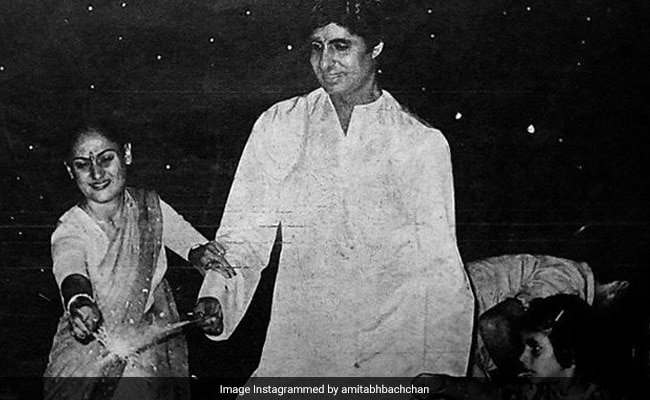 Amitabh Bachchan has an impressive collection of throwback photos, some of which he shares on social media every now and then. A day ahead of Diwali, Amitabh Bachchan spread some Diwali cheer on Instagram with a priceless photo from his throwback treasury - it's a blast from the past, starring Amitabh and his wife Jaya Bachchan. Pint-sized Shweta Bachchan also features in the throwback memory. In the black and white photo, Big B and Jaya can be seen celebrating Diwali with sparklers. The whole vibe of the photo is all about celebrating special moments with your family. Big B sent out best wishes for Diwali with his post: "Deepawali ki shubkamnaye," he wrote.

Here's a page out of Amitabh Bachchan's family archives:

Big B and Jaya Bachchan got married in 1973 after the release of the movie Zanjeer in which they were co-stars. They are parents to Abhishek Bachchan and Shweta Bachchan Nanda. Earlier this year, Big B shared a glimpse of Jaya Bachchan from a film that was shelved: "Jaya, in film Dagtar Babu in Bengali playing Vivekananda. Film could not be completed."

Earlier this year, Amitabh Bachchan, Abhishek and his wife Aishwarya, were diagnosed with Covid-19. They have recovered since then. In terms of work, Amitabh Bachchan was last seen in Gulabo Sitabo. He is currently hosting Kaun Banega Crorepati 12. His line-up of movies includes films such as Chehre, Brahmastra and Jhund. Big B will also be directed by Ajay Devgn for an upcoming movie titled Mayday, which is believed to be a compelling thriller.