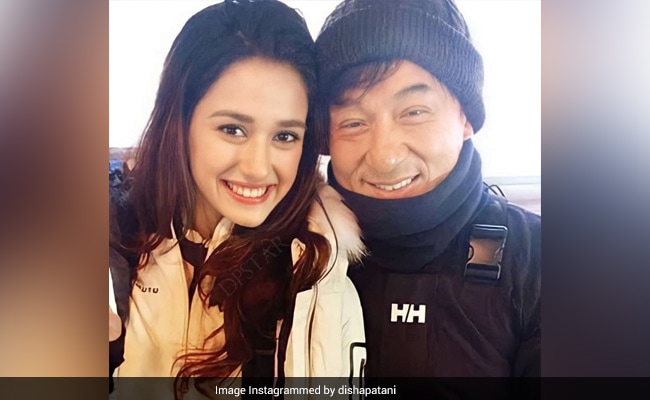 Disha Patani, in a throwback state of mind, shared a picture from the "happiest day" of her life (her words). The picture features Disha along with legendary actor Jackie Chan. For the uninitiated, Disha Patani co-starred with the veteran actor in the 2017 action film Kung Fu Yoga which also featured Bollywood actor Sonu Sood. As the film clocked 4 years on Thursday, Disha Patani shared a memory from the sets of the film and she wrote in her caption: "Happy 4 years of Kung Fu Yoga. Love you Taguu." Posting a BTS picture on her Instagram story, Disha Patani wrote: "This was the happiest day of my life." In the comments section of her post, Disha's rumoured boyfriend Tiger Shroff's mother Ayesha Shroff wrote: "Soooooooo cuuuute Deeeshu."

In terms of work, the actress was last seen in Mohit Suri's action-thriller Malang, which also featured Anil Kapoor, Aditya Roy Kapur and Kunal Kemmu. Disha Patani's  next film is Prabhu Deva's Radhe: Your Most Wanted Bhai, which will be her second project with Salman Khan. The duo have earlier shared screen space in the 2019 film Bharat, which also featured Katrina Kaif and Tabu. Radhe: Your Most Wanted Bhai will also star Jackie Shroff and Randeep Hooda in pivotal roles. The film's lead actor Salman Khan recently announced that the movie will release on Eid this year.

Disha Patani, who began her career as a model, stepped into Bollywood with the 2015 sports biopic MS Dhoni: The Untold Story, co-starring late actor Sushant Singh Rajput. The film also featured Kiara Advani. The actress has also been a part of films such as Baaghi 2, co-starring rumoured boyfriend Tiger Shroff and Loafer among others.