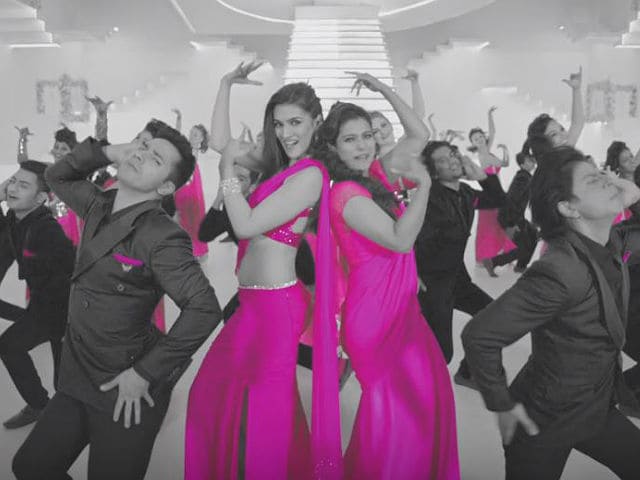 Shah Rukh, Kajol, varun and Kriti in a still from the song Tukur Tukur.

Tukur Tukur is the first song from the film which features the quartet together. Previous songs Gerua and Janam Janam were about Shah Rukh and Kajol's love story; another song highlighted Varun and Kriti's Manma Emotion. (Also Read: How Shah Rukh Khan and Kajol Shot Gerua in Iceland. It's Not Pretty)

In Tukur Tukur, Shah Rukh and Varun made an impressive entry on an IO HAWK, which Shah Rukh has used for some time now to relive the stress off his broken knee. In an interview to NDTV SRK had said: "I saw Justin Bieber using it during my visit to London recently and I thought to myself that this was 'perfect' for my broken knee. Now I can rest it and still move around. I have even done a song for Dilwale on an IO HAWK." (Also Read: Varun Dhawan's Manma Emotion Jaage, Courtesy Kriti Sanon)

In the song, Kriti and Kajol danced cheerily in pink and black saris, while Varun and Shah Rukh supplied humour and fun to the situation.