John Abraham was up on his feet soon after he suffered injuries on set. He filmed an action sequence right after 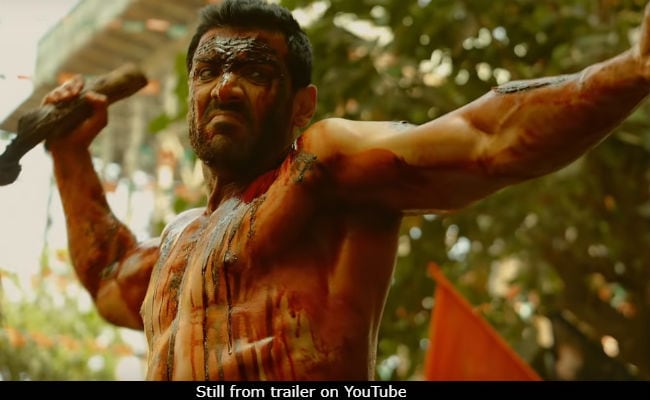 John Abraham in a still from Satyameva Jayate (courtesy YouTube)

Looks like John Abraham doesn't mind a few bruises. For Satyameva Jayate, the actor refused to opt for a body double and injured himself while filming a song titled Tajdar-E-Haram, director Milap Zaveri told mid-day. "We had to use real knives because the audience would be able to tell the fake ones from the real. By the fourth take, John had suffered multiple cuts," mid-day quoted Mr Zaveri as saying. Tajdar-E-Haram shows John Abraham performing a ritual associated with Muharram. Mr Zaveri told mid-day that John continued shooting till he got the shot right and only after that he asked for medical assistance: "Since he had makeup on, we didn't realise that he was bleeding. It was only after we had canned the shot that he rushed to get medical help."

Well, John was on his feet again soon after and he also filmed an action sequence during the same schedule: "John even filmed an action scene after we wrapped up the song shoot," mid-day added Milap Zaveri as saying. The trailer of Satyameva Jayate, released in June, gives a glimpse of the song in it.

Satyameva Jayate is an action-thriller headlined by John Abraham and also stars Manoj Bajpayee and Amruta Khanvilkar. Satyameva Jayate has booked August 15 as the release date when it will collide at the box office with Akshay Kumar's Gold. In a previous interview to IANS, John said the release date is a decision entirely made by the makers and hence, he has little to do with it: "Akshay is an actor in Gold and I am an actor in Satyameva Jayate. It's a producer's decision from both sides. It is about Excel Entertainment and T-Series, so I have no say in that at all."

Meanwhile, Akshay appeared to take a slight dig at John for his comments on the clash. At the song launch of Gold, this is what he told IANS: "It is true that he is my friend and I have learned that anyone can release their film with other actor's film so, next time, I will also do the same."

Psyched to see John Abraham play a feisty and righteous cop in Satyameva Jayate? Head to the theatres on Independence Day!