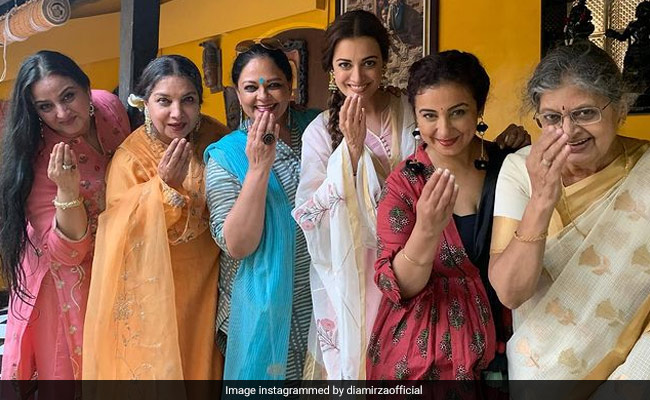 Actress Dia Mirza, on Wednesday, marked the festival of Eid-al-Adha by sharing a throwback picture from the pre-COVID times. Dia Mirza's Eid throwback features actresses Shabana Azmi, Divya Dutta, Tanvi Azmi and Sulbha Arya. In the picture, all the actresses can be seen in posing as they greet everyone with the gesture of Aadab. Sharing the picture on Instagram, Dia Mirza went down memory lane and recalled the times when she used to meet all her friends on the occasion of Eid. "Woh bhi ek waqt that jab sab Eid ke roz mila karte the (those were the days when everybody used to meet on the day of Eid)," she wrote in the caption. Dia went on to wish everyone "Eid Mubarak" and said that she misses Shabana Azmi. "Eid Mubarak sabko! Wishing better times for all. Shabana Amma miss you and all our wonderful friends," Dia wrote in the caption of her post.

Dia Mirza, who got married to businessman Vaibhav Rekhi earlier this year, recently announced that she had welcomed her first baby in May. In an emotional post, Dia revealed that she has named her son Avyaan Azaad. In the post, Dia also revealed that her son was born premature and that he is being taken care of at the hospital since then. She quoted Elizabeth Stone in her post and then wrote: "These words perfectly exemplify Vaibhav and my feelings right now. Our heartbeat, our son Avyaan Azaad Rekhi was born on May 14th." She added: "Having arrived early, our little miracle has since then been cared for by tireless nurses and doctors in the Neonatal ICU."