Dhokha: Round D Corner Review: Subjects Audience, Actors And The Genre To A Massive Dhokha

Dhokha Round D Corner Review: The R. Madhavan and Aparshakti Khurana starrer has performances that swing between the mawkish and the manic and do no good at all to the reputation of the actors 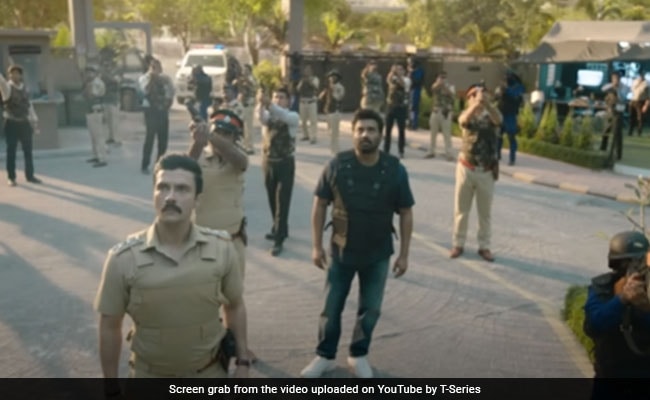 A still from Dhokha: Round D Corner trailer. (courtesy: T-Series)

What lies round the corner in this slipshod hostage drama is a whole bunch of lies. That is something that the title makes no bones about. What it does not tell us, however, is that the acts of dhokha being perpetrated aren't confined to the plot. They infect the film, too. Dhokha Round D Corner, in cinematic terms, dishes out deception all around.

There isn't a whit in director Kookie Gulati's film that can rise above the sloppy writing, the inept execution and the hammy acting. The R. Madhavan and Aparshakti Khurana starrer has performances that swing between the mawkish and the manic and do no good at all to the reputation of the actors.

Dhokha Round D Corner revolves around crooked people who might be mad to boot. Insanity - be it assumed, alleged and real - is a key element in a narrative that pits everyone against everyone. All the four major characters in the film believe that the others are up to major mischief and deserve to pay the price for their transgressions.

There is, to be begin with, a great deal of promise in the encounters that take place in a zone somewhere between truth and falsehood. Sadly, it remains just that - a promise.

In Dhokha Round D Corner, there isn't a chance in hell of anybody, including the audience, getting out of the maddening melee in one piece. From the word go, the film is stuck in a hole that only gets deeper as the story unfolds.

The film starts off with a prolonged introductory song in the course of which a couple residing in a swanky Mumbai apartment go from being happily married and all lovey-dovey to snapping at each other in anger and disgust and teetering on the brink of divorce. The number ends but the plot convolutions don't.

The two-hour thriller revolves around a woman who might or might not be mentally unstable. As she readies for a big move in her life, she is taken hostage in her own home by a fugitive terrorist, who seems anything but in control of his bearings.

The captive's desperate husband and an anti-terrorist squad (ATS) officer from whose custody the gun-wielding fanatic has escaped struggle to devise a plan to rescue the trapped lady without causing any collateral damage. The policeman keeps insisting all will be fine. The husband isn't convinced.

The police officer, played by Darshan Kumar, wonders aloud at one point who is more insane - Saanchi (debutante Khushalii Kumar), the woman in harm's way, or her adman-husband Yatharth Sinha (R. Madhavan). A coherent answer to that question isn't available until the last quarter of an hour or so of the film, by which time the audience is given a few more morally and psychologically knotty points to contend with.

It is easy to see pretty early that this mammoth mess isn't headed anywhere. Rationality is under frontal attack as the terrorist, Haq Gul (Aparshakti Khurana) - the Lashkar man who awaits execution after being convicted for a hostel explosion that killed 13 students, and the woman he has at gunpoint play innocuous games with each other that are not only laughably silly but also completely implausible.

The terrorist, too, does not exactly cover himself in glory as he negotiates with the police. His demands keep changing, as do his equations with a hostage grappling with Stockholm Syndrome. In the control room set up in the compound by the ATS, emotions and tempers run riot. Yatharth and the cop, Harishchandra Malik, are constantly at each other's throats, jeopardising Saanchi's safety.

Despite all the sound and fury and the hemming and hawing, Dhokha Round D Corner is unable to create tension or suspense of any kind. Overrun by overwhelming inanity, the plot flounders and nosedives. Blame it as much on the clueless writing and directorial inadequacies as on the actors looking and sounding increasingly desperate to make it all work. You can almost sense that they know that no effort on their part would be enough to turn things around.

While the exchanges between the captor and his victim is puerile to say the least, the confrontations between the police officer and the woman's husband border on the childishly crabby. After the hurly-burly is done, the last twenty minutes of the film are expended on unleashing a string of twists that are meant to convey that it is truth that has been the biggest casualty.

Everybody in the story has dirty secrets and these are conveniently kept under wraps until the very end. When they begin to tumble out, they do so in a bewildering rush, making everything that has gone before appear even more grotesque than one had initially assumed it to be.

Much earlier in the film, the hostage asks the hostage-taker, "Ek aur kahani hai, sunoge (I have another story, should I start?)" The terrorist's response is instant and firm: "Nahin." It resembles a plea for deliverance. That is exactly the way Dhokha Round the Corner, with its web of laboured lies and scattershot methods, leaves us feeling - fatigued and frayed.

The sorry state of affairs is not the least due to the fact that the characters are all flat cardboard cut-outs that possess no dimensions beyond what is out there for all of us to see. So, the lies that are unbundled all at once as the film limps towards its end are far less surprising than they are off-putting.

The screenwriter appears to have put a great deal of thought into naming the characters. Yatharth is reality, Harishchandra (the legendary king of yore known as an epitome of probity) is meant to denote honesty, and the name Saanchi (another name for Goddess Lakshmi) stems from a word that stands for truth. Had the quartet - including Gul the terrorist - not been allowed to drift as aimlessly as it does, even the hare-brained plot might have yielded some dividends.

Much has already been said about the quality of the acting in this film. It would be unfair to blame the cast for failing to paper over the numerous creases that mar the script. The film subjects not only the audience and the actors but also the medium and the genre to a massive dhokha they could have done without.