Dharmendra and Vinod Khanna co-starred in films like Farishtay, Rakhwala and The Burning Train among others 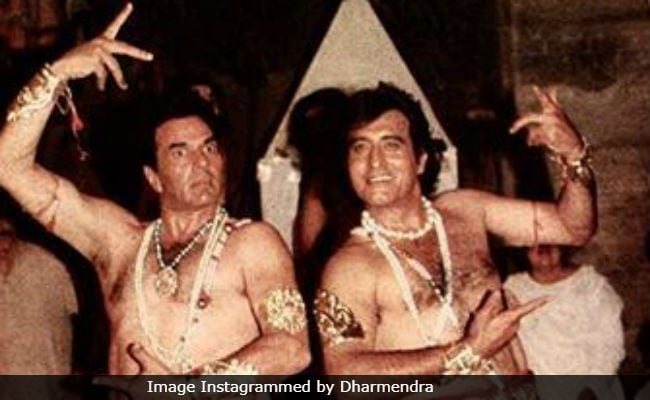 Veteran actor Dharmendra shared yet another throwback picture on his Instagram profile and we bet it will make you ROFL. On Wednesday, the 82-year-old actor treated his fans to an old picture, featuring his Farishtay co-star Vinod Khanna. Dressed in bright costumes, both the actors can be seen posing in a funny manner and it wouldn't be wrong to say that the major highlight of the picture is the duo's expressions. Dharmendra described the picture in the best possible way and wrote: "Our steps are so original and unique, even we couldn't repeat it!" Dharmendra's Instafam not only loved the picture but also the caption on his post. Comments such as "His face, expressions and his humor... 100% on point" and "You are so funny" were seen on the post.

Our steps are so original and unique, even we couldn't repeat it !!!

Dharmendra and Vinod Khanna co-starred in several Bollywood films in the Seventies and the Eighties, including Farishtay, The Burning Train, Rakhwala and Patthar Aur Payal among others.

Late actor Vinod Khanna was posthumously honoured with Dadasaheb Phalke Award at the 65th National Film Awards earlier this year. Vinod Khanna, who was battling cancer, died at the age of 70 in a Mumbai hospital last year.

Here are some of our favourite throwback pictures shared by Dharmendra:

MEIN , RAFAT RAFTA, YPD PHIR SE, love you all for your loving response!!!

A few weeks back he shared this picture of his Bobby Deol.