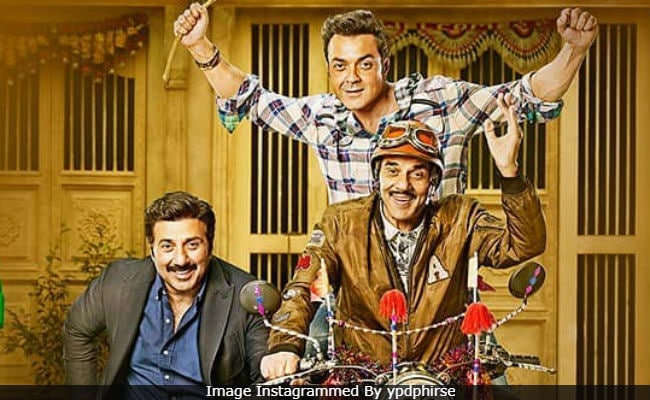 The third instalment of the Yamla Pagla Deewana series - YPD Phir Se - marks a fresh start for the franchise. It tells a tale that is brand new and derives nothing at all from the earlier two parts. But despite the major tweaks in the roles that it allots to the three lead actors, this action comedy does not exude much originality.

Dharmendra - he does not play the patriarch here - and his two sons plunge headlong into their roles, but their robust interventions are unable to inject life into a mechanical, meandering, often mindless storyline. It obviously rests on the Deol threesome. Dharmendra is an old tenant who pays a pittance by way of rent; Sunny Deol is a staid but no-nonsense widower with two sons who clings to his traditional medical knowledge with a vengeance; and Bobby Deol plays a younger sibling and lonesome drifter looking for an anchor in life and not averse to resorting to a few shady throws of the dice in a bid to turn his fortunes around.

The film is the first Bollywood venture for director Navaniat Singh, who has helmed a string of Punjabi hits over recent years. Yamla Pagla Deewana Phir Se seems to be targeted at the same constituency as his other films. Sadly, it tries to too hard to pepper the narrative with a mix of emotions and humour. The result is a film that is stranded between two extremes - excessive drama and over-the-top joviality.

The Yamla Pagla Deewana Phir Se script is credited to Dheeraj Rattan, writer of such Punjabi cinematic fare as Jatt & Juliet 2 and Romeo Ranjha. The world that he creates in Amritsar in the film's first half has stray touches of realism. He clearly knows this space well. But the part of the story that unfolds in Surat - this takes up almost all of the second half - is outright soap opera.

The plot is harmless enough but the pace is exasperatingly sluggish. An upright Ayurveda doctor runs an ancestral dispensary in Amritsar, from where he doles out inexpensive herbal formulations that work like magic on his patients. The owner of a giant pharmaceutical company in Gujarat has his eyes on the formula for an age-old panacea, Vajrakavach. The latter knows he can make a killing if he can get his hands on the secret.

But Puran Singh (a bespectacled Sunny Deol), his dhaai kilo ka haath still as potent as ever, will have none of it. When the tycoon comes calling with an offer and tries to throw his weight around, the doctor socks the entrepreneur so hard that he is left sprawled on all fours.

Puran's younger brother Kaala (Bobby Deol), a hard-drinking bachelor who curses his lot every single day after he has had his nocturnal tipple, is all for the lucrative deal. In one drunken tirade, he raises a hue and cry over his name. Why, he hollers, must a fair and handsome man like him be called Kaala? And colour of skin is only one of the many fixations that the film suffers from.

How the short-tempered doctor, using both his physical might and his right over his family inheritance, saves his traditional knowledge from the corporate predator who steals it is what the story is about.

The battle between bio-pirates and the protector of Ayurveda ends up in a Surat Sessions Court presided over by Judge Sunil Sinha (Shatrughan Sinha in a special appearance), a college buddy of Puran's lawyer and intransigent tenant Parmar (Dharmendra) who continues to pay a Rs 115-rupee rent despite constant demands that he pay more or leave.

The brothers are embroiled in a protracted legal battle with Parmar, but when push comes to shove the crusty old man offers his services to the duo provided he receives a steady supply of booze and non-vegetarian food in Gujarat. Dharmendra's appearances are heralded by songs from his old hits (Kahani Kismat Ki, Dost, Jugnu, etc) in the background. But they add no real value to the film.

A love story runs parallel to the main plot. It hinges on a girl who jets into Amritsar from Gujarat for a weeklong research on Ayurveda. Kaala falls in love with the lady, Chikoo (Kriti Kharbanda in a sketchy role) - main search mein tha, yeh research mein aayi hai, rab ne bana di Jodi - before she returns home. When the action shifts to Gujarat, Kaala accompanies his brother and Parmar in the hope of meeting Chikoo again.

The refrain is constant: we are Punjabis and we take nothing seriously save love. The trio from Amritsar, after they are ensconced in a vegetarians-only residential colony, drive down to a Daman nightclub to croon 'Litre litre pee gaya main little little karke'. Replete with silly adventures of this nature, Yamla Pagla Deewana Phir Se keeps returning to the realms of idiocy at the slightest provocation.

You do not need to subject yourself to its surfeit of action, comedy and melodrama unless you are an inveterate fan of the Deols, collectively or individually. What Yamla Pagla Deewana Phir Se offers purely as a cinematic outing isn't worth your time.