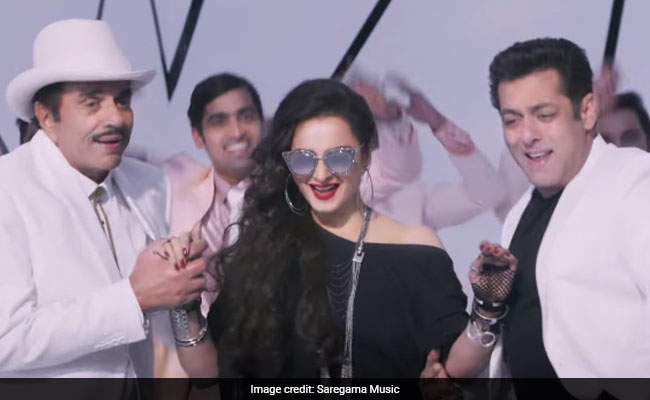 A still from the song Rafta Rafta (Courtesy YouTube)

Remember the iconic song Rafta Rafta Dekho featuring Dharmendra and Rekha from the film Kahani Kismat Ki? The yesteryear song has got a makeover and it features in Dharmendra's upcoming film Yamla Pagla Deewana: Phir Se. The song is nothing like the Kishore Kumar classic and it has undergone major twist. Rafta Rafta is a remixed medley of several Bollywood songs - Rafta Rafta, O Mere Sona Re, Salaam-E-Ishq and Main Jat Yamla Pagla. Dharmendra, Salman Khan, Rekha, Shatrughan Sinha, Sonakshi Sinha, Sunny Deol, and Bobby Deol are part of the foot tapping number. The 5.30 minute video opens with Dharmendra and Salman Khan lip syncing famous dialogues from each other's films. Then enters Sonakshi Sinha, who dances to the tunes of O Mere Sona Re. Sonakshi's father Shatrughan Sinha makes a brief appearance in the video.

Rekha's appearance in the video is hands down the best part. She gracefully dances to Mukaddar Ka Sikander song Salaam-E-Ishq. The medley ends with the entry of Sunny and Bobby Deol, who are joined by Dharmendra, Salman, Rekha, Sonakshi on the dance floor. Everybody is seen shaking leg to the song Main Jat Yamla Pagla Deewana.

Talking about his experience of filming the song, Dharmendra in an interview to news agency IANS said: "I think it is my karma that whenever I call anybody from the industry, they associate themselves with us. Whenever I need somebody, the entire industry is there for me." Dharmendra also thanked Salman Khan and Sonakshi Sinha for being part of the rendition. "Salman himself is very good human being. I love him. He is a wonderful and genuine person and Sonakshi is like my daughter," IANS quoted him as saying.

Yamla Pagla Deewana: Phir Se is the third installment of the Yamla Pagla Deewana series. The film features the father-son trio - Dharmendra, Sunny Deol, Bobby Deol. Directed by Navaniat Singh, the film is set to hit the screens on August 31.