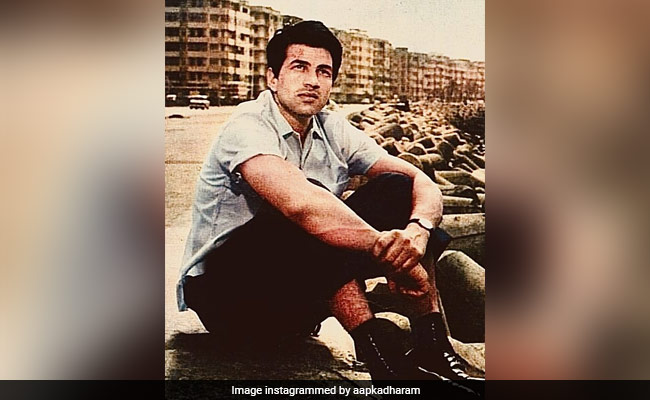 Veteran actor Dharmendra, 85, loves sharing vintage pictures of himself from his film diaries. The actor, on Saturday, posted a picture from a screen test he tried and won before he had started shooting for his films. Dharmendra, born in a village in Punjab, made his debut with Arjun Hingorani's 1960 film Dil Bhi Tera Hum Bhi Tere. In the throwback photo, which has now gone viral on social media, Dharmendra can be seen a shirt and pants and sitting seaside with tall buildings in his background. "Sapnon ke shehar mein......aya tha ho ke swaali......ban ke swaali...baitha hoon...aai bhijaane kiyon..... shak o shubhaat ye....khud ke liye......jaate nahin .....dil se mere .....Friends love you for your loving response," he wrote in the caption and added: "A photo of a screen test winner from a village.....before shooting" in the comments section.

Dharmendra is also known for his performances in hits like Sholay, Phool Aur Patthar, Kaajal, Dharm Aur Qanoon, Bhagawat and Charas. He was last seen in the 2018 film Yamla Pagla Deewana: Phir Se, which also starred his sons Sunny and Bobby Deol. His next film is Apne 2 the sequel to his 2007 film Apne, co-starring his sons.

Dharmendra often shares throwback pictures and videos of himself. We have selected a few for you, take a look:

Bollywood actors Sunny and Bobby Deol are Dharmendra's sons with his first wife Prakash Kaur while actress Esha Deol is his daughter with actress and wife Hema Malini.

Every Time Alia Bhatt Posts A Yoga Pic, We Want To Chill In Her Living Room