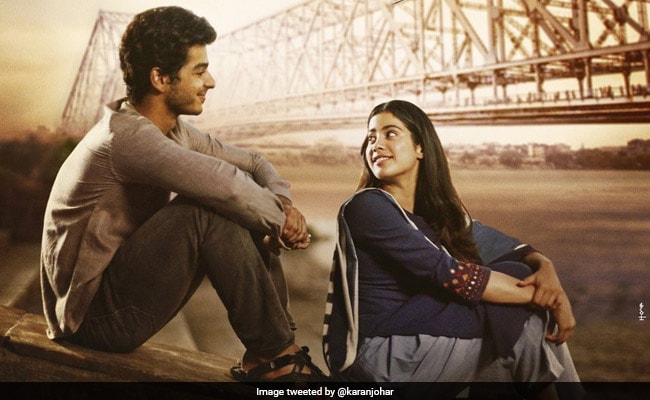 Janhvi Kapoor And Ishaan Khatter in a still from Dhadak(Image courtesy: karanjohar)

Finally, Janhvi Kapoor and Ishaan Khatter's Dhadak will arrive in the theatres tomorrow. From the time of its inception, Shashank Khaitan's Dhadak featured in the headlines for several reasons. Firstly, it is the Bollywood debut of late actress Sridevi's daughter Janhvi Kapoor. Secondly, the film is the Hindi remake of Marathi blockbuster Sairat - reasons enough to watch the film FDFS (First day first show). Much like its original film, Dhadak explores the themes of class divide and honour killing. Janhvi plays the role of the daughter of an influential politician, which was played by Rinku Rajguru in Sairat. In an interview to PTI, this is what Janhvi said about her role in the film: "Archie's character (Rinku Rajguru) was so inspiring to a lot of young girls. She didn't have to be saved. I'm fortunate to play Parthavi. She's also assertive like Archie, but a lot of that comes with her sense of pride and responsibility that she belongs to an effluent royal family."

Ishaan Khatter, who made his debut with Iranian filmmaker Majid Majidi's film Beyond The Clouds, plays Madhukar in Dhadak. The character had been played by Akash Thosar in Sairat. Ishaan, who featured as a drug peddler in Beyond The Clouds, will play Janhvi's love interest in the film.

The Dhadak trailer released last month received mixed reviews on social media. Apart from the basic plot, some of Dhadak's songs - Zingaat and Pehli Baar, have been borrowed from the original. But time and again the makers of Dhadak have urged the audiences to give the film a chance. "Sairat is really special and iconic film but we are trying to show that story from a new perspective. We just want one chance from the audience to watch the film as we have made this with a lot of hard work and honesty," Janhvi had told IANS during an interview to IANS.

Watch the trailer of Dhadak:

Meanwhile, Madhuri Dixit, who had watched Dhadak, seemed to be impressed by Janhvi and Ishaan's performance in the film.

Ready to watch Dhadak in the theatres on Friday?